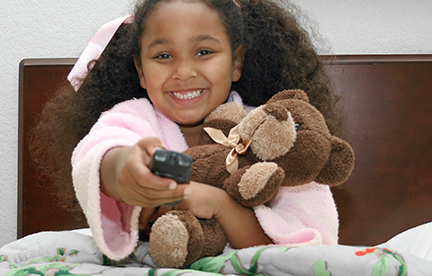 If you’re concerned about your child’s weight gain, you might consider removing the TV from her room.

In homes-of-plenty, TVs in kid bedrooms are the norm, but that may not be so smart if you’re concerned about your child’s weight, experts say. A study released on Monday, March 17 found that 60 percent of kids ages 10 – 14 had TVs in their room weight gain was evident – about one extra pound per year compared to peers without TVs.

Dartmouth University researchers gathered information from more than 3,000 kids and their parents in an ongoing survey. Researchers circled back to their subjects to and four years later and found that kids with TVs had gained pounds.

Stopping short of blaming the TVs on the extra weight, other explanations could be that kids with TVs in their rooms get less sleep and less sleep is a well-known indicator for weight gain.

Past studies have shown that TVs in adult bedrooms cause poor sleep habits and possibly a reduction in intimacy — another good reason to keep bedrooms screen-free.