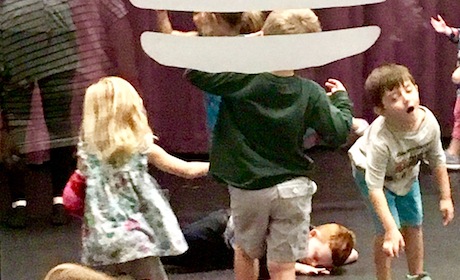 “I’ll see you in an hour!” A kiss on the forehead and off Luca went to his fourth week of Creative Toddling at The Children’s Theatre of Cincinnati. He readily walked into class, ready to sing and dance and act. It makes me so proud to watch my son feel confident and excited about his class.

Luca and I both have participated in classes together before. However, at 4 years old, he is now able to gain some independence and do classes without a parent present. It’s been particularly easy to drop him off at Creative Toddling because TCT has a sneak peek window where you can get a glimpse at the little actors and actresses. This week, I snuck a peek and saw Luca dusting himself with fairy dust and falling asleep. It was adorable. It was SO adorable. He was in his element of playing pretend, and he was having a blast!

Week 4 at TCT Cincy has me feeling good about encouraging independence and self-confidence in my kids. I set out looking for something to be Luca’s “thing,” and I think we’ve found it! If you think acting could be your child’s thing, make sure to check out classes at The Children’s Theatre of Cincinnati.