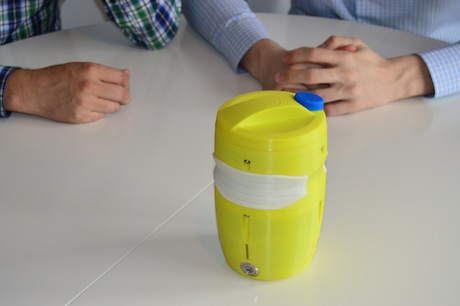 With fall on the way, there’s no better way to warm up than with a cup of soup or hot chocolate (or coffee, for us grown-ups).  And with soccer, high school football, tailgating at Bengals games in the schedule, plenty of us could use a way to keep our hot stuff hot without having to drag along a bunch of equipment.

Fortunately, a local mom is working on a solution called MOX, a portable container that can heat up food or liquid in just a few minutes.  Best part?  It’s wireless and holds a charge that lasts through five or six heating cycles.  Even cooler?  We were invited to test out the prototype and give feedback, so we get to be part of the process as the product continues to develop!

The brainchild of Margarita Moksin, local mom/attorney/entrepreneur/visionary, MOX was born out of an idea on how to heat up breastmilk while on the go with Baby.  It can be used to warm up meals while at the park, traveling, hiking and even at the office.

“MOX is currently in the prototype stage,” says Moksin, who is developing the product under her company SoMi, which will be devoted to creating sustainable items that do not contribute to producing waste.  “We are raising awareness to get as much feedback for any adjustments before manufacturing.”

After some initial feedback, the MOX has already evolved to include a low heat and high heat knob and is dishwasher safe.  Other features Moksin and the engineers are working on include the ability to maintain a longer charge with solar energy, and include a USB opening so you can charge your phone while on the go.  Sounds good to us!

To learn more about MOX or SoMi, head to Moksin’s YouTube channel where you can watch videos of the prototype’s development and even offer your own feedback based on what you see.