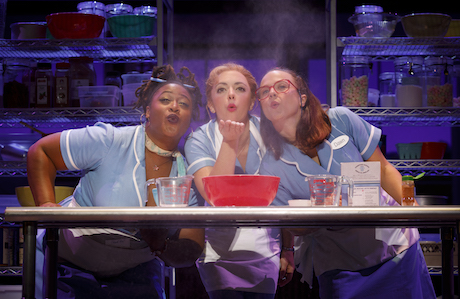 You’ll definitely want to grab the girls for this one — Waitress is a witty musical with catchy tunes that will take audiences from giggles to gasps in a story of love, escape from abuse, and of course, pies.

Inspired by the movie Waitress, the production was put together by an all-female creative team, including five-time Grammy nominee Sara Bareilles, best known for her songs Brave and Love Song.  The story features Jenna, played by Desi Oakley, a waitress who is known in her small town for her creative (and creatively named) pies.  But Jenna struggles in an abusive marriage to Earl.  She dreams of escape but when she discovers she is pregnant, she has a real sticky mess on her hands.

Fortunately for Jenna, she is supported by her two fellow waitresses Dawn and Becky, played by Lenne Klingman and Charity Angel Dawson.  They encourage her to chase her real dreams (and sometimes give her a reality check), so when a baking contest comes along, Jenna finally realizes it’s her chance to get things right.  But first, there’s Earl to deal with, and a handsome new doctor to resist!

We won’t give away the ending, but we can tell you that the tunes are catchy, the laughs are plentiful (keep your eyes on Dawn, she is something of a scene-stealer), and the immensely talented cast will make you wish you could join them at Joe’s Pie Diner and have a slice yourself.

Catch Waitress at the Aronoff Center for the Arts, 650 Walnut St., now through Jan. 21.  Click here for details.