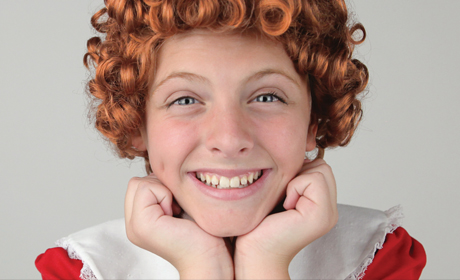 Allison has worked on stage nearly half her life. In 2008, at the ripe old age of 7, she auditioned with her older sister for Acting Up’s production of Alice in Wonderland, and landed a part in the ensemble. “I was really nervous,” she recalls, “and not as confident as I am now, but it was still really fun.” Her first speaking role came the following year, when she was cast to play Molly in LaComedia Dinner Theater’s production of Annie, and that’s when she was truly hooked.

Now at 14, she carries a resumé that stretches the limits of a single page’s margins. Her list of performances is considerable — she has played everything from ensemble characters with regional theaters like the East Side Players and the Children’s Theatre of Mason, to speaking roles in Playhouse in the Park’s annual production of A Christmas Carol. Many people will recognize the young talent as Annie from the Children’s Theatre of Cincinnati’s 2013 production of Annie, Jr., for which she won the 2014 Award for Outstanding Youth Performance from the League of Cincinnati Theatres. She was also nominated for an Orchid Award for Excellence in Acting for the role of Cricket in Acting Up’s production of Mulan, Jr.

Allison even has experience with the thrill of a Broadway audition. Shortly after playing Molly with LaComedia Dinner Theater, she traveled to New York to audition for the Broadway production of the show. After several nail-biting call backs (a big deal in itself) … she didn’t get a role. It was a tough day, but also one of the real-life experiences that her mom says has helped her to develop self confidence.

She loves acting and being in shows. “It’s fun to learn more about it. It’s hard work, but it’s fun,” she says. “I like being a new character. It’s fun to work with directors and meet new cast mates.” And Allison has had the opportunity to work with several directors and mentors, including Jay Goodlett, Roderick Justice, Michael E. Haney, acting coach Charlie Clark, and vocal trainer Paul McCready, among others, all of which her parents Rob and Cindy are quick to name as part of Allison’s success.

“The training she gets in these shows with these top directors and other professional adults has really helped her as an actress,” says her dad, Rob. Mom Cindy says that even in the instances when Allison doesn’t get a role she wants, she usually ends up in another role that’s interesting to her. She’s learned that decisions are not always made based on her performance, but that sometimes she just won’t have the “right look,” something she has learned not to take too personally.

While her dreams ultimately do include Broadway, Allison will continue to audition, learn and perform here at home, attending programs like the Children’s Theatre of Cincinnati’s STAR Program, with thoughts of someday attending UC’s College-Conservatory of Music. With the support of her parents, it’s a family affair.

“The first time I saw her really perform, I couldn’t believe the stage presence. We got the bug. Things fell in place and it’s been an amazing, wonderful ride!,” Rob says.