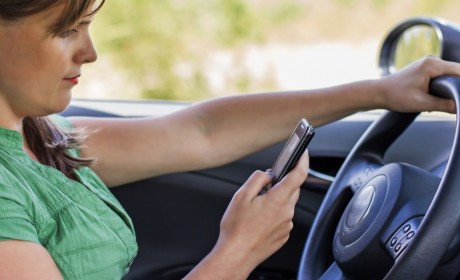 The question is why?
Why would a mom behind the wheel of her car with a baby strapped into a car seat engage in risky business like texting while driving?

Have things really gone this far?
Say no to texting and driving!

As much as 78 percent of mothers with babies under age 2 acknowledge talking on the phone while driving their babies and 26 percent say they text or check their e-mail while doing it, reports a new survey of nearly 2,400 mothers out today from American Baby magazine and Safe Kids Worldwide.

Analysis of the survey shows that women who have babies and do this exhibit behavior much like that of teenage drivers: reckless. The new survey of mothers (out today) finds an attitude among new moms that is reflected in the general population: They tend to think they’re safe drivers but actually engage in risky  habits.

•    78% of moms talk on the phone while driving with their kids, a habit that is as dangerous    as driving drunk.

•    75% of new moms say that they’re more flustered in their daily lives since having kids.

•    Moms log an average of 5 hours and 20 minutes of consecutive sleep nightly, slowing their reaction time.

•    Two thirds of moms find it tough to concentrate on a single task, like driving.

•    55% of moms admit to driving above the speed limit with their baby in the car when they’re in a rush.

•    Nearly 10% of new moms have been in a crash while driving with their baby.

•    64% of moms have turned around to tend to their child’s needs while driving.

•    77% of moms are more afraid of getting in an accident since having a baby.