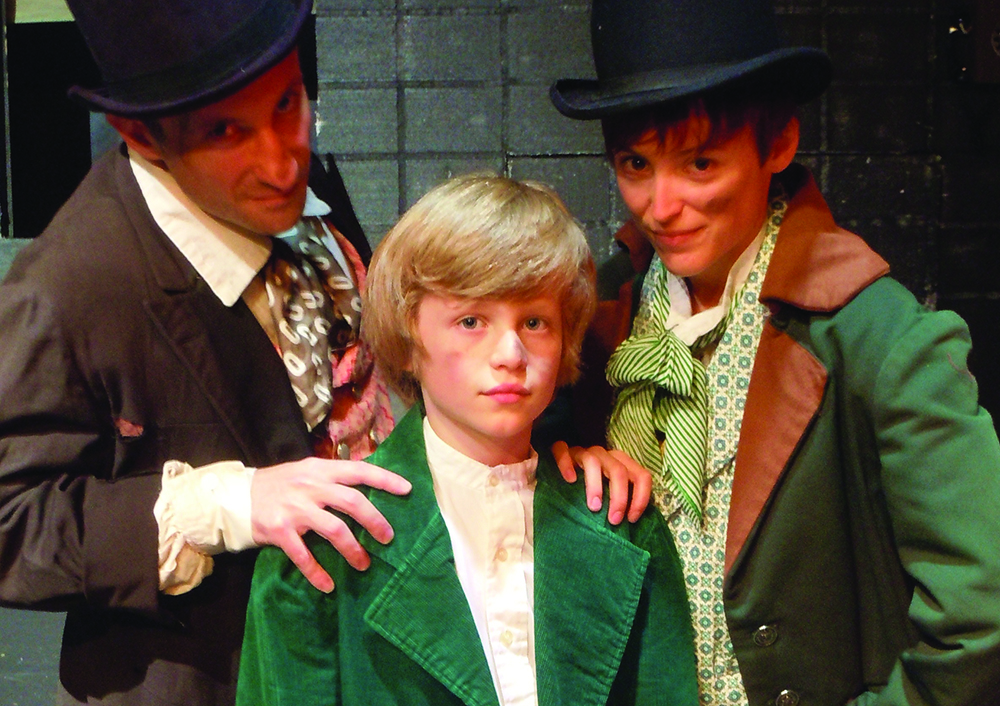 “I believe there’s no better family experience than watching a story together performed by live actors,” says Michael Evan Haney, the director of Cincinnati Shakespeare Company’s (CSC)  upcoming Oliver Twist. “Theatre engages the imagination and provides a topic of discussion that can provide a family with a beautiful shared memory,” he adds.

Experience those “beautiful shared memories” this month when CSC presents the regional premiere of Neil Bartlett’s adaptation of Oliver Twist Sept. 6 – 29. Located in downtown Cincinnati, CSC is surrounded by convenient parking and good restaurants. Additionally, the venue itself is an excellent place for kids to see theater thanks to the elevated stage and well-positioned seats. The theater’s also an intimate space, and Haney believes its size will enhance the telling of Oliver’s tale.

Pattison Elementary school fourth-grader Ethan Verderber plays Oliver Twist. He got involved in theater because his sister, Anna, enjoyed acting. “I wanted to try it, but I wasn’t sure I would like it,” he says.  “I did try it, and I love it!” He says, “it’s cool” to be Oliver, but finds it sometimes difficult, “learning a lot of lines!”

Oliver’s lines may differ from what most families expect. “What audiences know is the musical Oliver!,” says Haney; “A great piece of musical theatre, but a very tame and watered down version of the Dickens’ masterpiece. The challenge in this piece is to tell the story authentically, and hopefully surpass the audience’s expectations by telling the familiar parts of the story in a new, exciting way, as well as surprising them with the plot points often plastered over in other popular versions.”

Haney believes that exposing the often hidden plot points shows the playwright’s commitment to the original story. “Neil Bartlett has created a very authentic version of Charles Dickens’ great novel. The play is almost all taken word for word from the book. It captures Dickens at his best — alternating dark comedy with true pathos. This is a brutal story told with humor and grace and an abiding sense of hope,” he says.

Even with the intense emotions, families may find Oliver Twist rewarding, and Haney says to prepare kids for it. In addition to reviewing theater etiquette about not talking, remaining seated, and showing appreciation with applause and laughter, Haney advises a little explanation about Dickens’ world before the show. “Parents can talk about the story and the characters they are about to see. They should also explain the time period and how the world of Oliver Twist is very different, and yet in some ways the same as ours. There were no computers or cell phones, but there were still homeless children, cruel people in the world, and kind, loving and generous ones as well,” he adds.

Haney believes that families who enjoy Oliver Twist together will gain more than an evening’s entertainment . “I hope this play reminds us of our duty to help our fellow man. To not judge people by their circumstances, but by their actions. That good conquers evil. That God is love. I hope this production creates a curiosity to explore the novels of Dickens — maybe the greatest storyteller of all. I also hope it leads families to attend other plays — of all types. There is as much entertainment value in serious works as in musicals and comedies. Going to the theatre is a habit, that if formed early, will never be regretted, only embraced.”