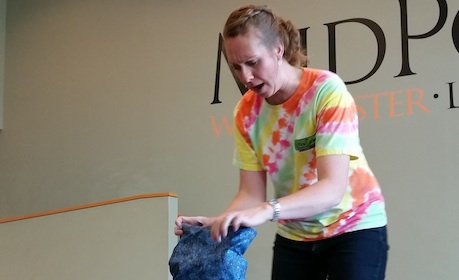 Mom Reporter Tina Pratt and her children recently caught Erica Carlson’s Super-Duper Magic Show at Midpointe Library in West Chester (9363 Centre Pointe Dr.; 513-777-3131 or midpointelibrary.org) — check out what she had to say!

Erica Carlson’s “Super-Duper” magic show is engaging for all ages!  My 1-year-old was mesmerized by her balloons, puppets, and Erica’s high energy.  My 4-year-old son couldn’t take his eyes off of her.  He called her “Magically silly and SUPER funny!”  She tied in kids’ interests by including some princess and super hero props while they went on a magical adventure to find Sedgie the Hedgie!  Oh, and did I mention that Sedgie the Hedgie is a REAL hedgehog?!?!  How cool is that?!?

The kids were not the only ones laughing and participating.  I found myself as well as other parents laughing at her silly jokes and antics.  At the end, each kid got to see Sedgie and they each received a balloon wand to practice their magic at home.  Both of my kiddos have been practicing their “Abracadabra’s” and “magic” tricks.  Hopefully, Erica Carlson takes 4-year-old interns because my son is ready to sign up!  He also wants her at his fifth birthday!

Get a complete schedule of Erica Carlson’s Super Duper Magic Show at her web site: ericaentertainment.com.

Tina Pratt is one of our Mom Reporters and the mom of two littles.  She is a former PreK – 5 special education teacher that now works as a behavior coach.  She enjoys being a tourist in her own town and finding ways to embed lessons into everyday fun!