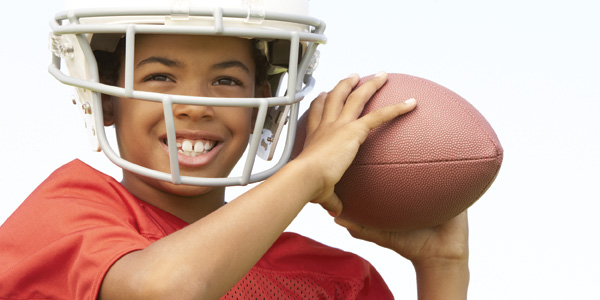 The NFL may be pushing awareness, but it’s actually parents with kids in sports who need to learn about sport concussions.

It’s a scary moment — one minute your boy is racing down the court or field, the next he’s on the ground, knocked out by a head-on collision. The coach suspects a concussion, but how does he know for sure? And what does having a concussion really mean, especially when it comes to recovery and getting back in the game?

It’s a Brain Injury, Folks
“It’s an interesting, and more challenging, question than you might think,” says Richard Falcone, director of Trauma Services and co-director of the Comprehensive Children’s Injury Center at Cincinnati Children’s Hospital Medical Center (CCHMC). He explains that concussions have long been “under-emphasized” because we don’t regard it as seriously as other brain injuries. But that’s exactly what a concussion is — a mild traumatic brain injury caused by a blow to the head.
The Centers for Disease Control (CDC, cdc.gov) says that the most common brain injury in sports is concussion, and estimates that approximately 300,000 sports-related concussions occur each year in the United States. Concussion can occur in any sport, however, it tends to be most prevalent in contact sports, with football taking top honors. Interestingly, a study published in the April 2012 issue of The American Journal of Sports Medicine found that girls are diagnosed almost twice as often as boys, although there doesn’t seem to be a clear explanation why. Researchers’ theories include the fact that girls have less muscle mass around their neck and shoulders to support their heads in an injury, to the idea that girls simply report their symptoms more often than boys.

Symptoms and Signs
A head CT of a child with a concussion may look completely normal, according to Falcone, however there are recognizable symptoms. A player might report headaches, dizziness, nausea, or sensitivity to light and sound. A coach might notice that the child is confused about instructions, that he can’t recall events right before or right after the injury, or there might even be noticeable personality or behavior changes. Other signs and symptoms include seeing flashing lights, memory loss, muscle weakness, problems walking, vomiting, drowsiness, loss of consciousness and seizures.
Heading straight to the ER after a sports-related head injury is always the safest step. However, symptoms may not show up until hours or even days later. Since you can’t actually see a concussion, it’s on parents to monitor their child for 24 to 48 hours after an injury, even if their child shows no immediate symptoms. The key is to know what to look for, explains Falcone. “Having some headache is OK, headaches that are worsening is not OK. Some vomiting is normal, repeated vomiting is not necessarily normal.” He advises parents to ask themselves if their child’s symptoms are getting worse. If the answer is yes, then it’s time to see a doctor.

Treatment and Recovery
Your child needs rest with a concussion. He doesn’t have to stay in bed all day, but he does need to take a break from physical activity and activity that stresses the brain — including school, TV, computers and texting. “Just like if you injured your knee or twisted your ankle and you have to take it easy, if you hurt your brain, you should take it easy on your brain for a few days and let it recover,” says Falcone, admitting that it’s hard to convince young athletes to rest for long periods of time, especially if initial symptoms like headaches and vomiting clear up quickly. Some symptoms, like trouble sleeping or an inability to concentrate, are not always associated with concussion, even though they should be. And those are the symptoms that may last a while.

Says Sanjiv Lakhia DO, medical director of Heads Count, the most comprehensive sports concussion program in the Cincinnati area, “When you look at the amount of literature, it all tends to suggest that most concussions heal within two weeks. I would argue that’s not the case for the younger population. Teenagers take longer, our average has been four weeks, maybe six weeks.” He adds that this is a tough message to get across to those used to watching professional athletes return to the field within days of a head injury. “I tell parents concussion is more a form of ‘teenage time out.’ You have to really shut it down for a while,” he says. “That’s hard when you have a 14- or 15-year-old girl with a vast social network, using Facebook and her computer. It’s hard to tell them to change the way they live for the sake of their recovery.”
But re-joining the game too early can result in second-impact syndrome (SIS). Although the condition is rare, SIS is a second head injury that may result in more serious consequences. Because the brain already isn’t working correctly, even a minor bump to the head may lead to bigger problems, like intracranial bleeding or swelling. “Think about it like that twisted ankle,” says Falcone. “If it’s not quite back to where it was and you go back to play and twist it, it’s going to get hurt even more because it’s weaker to start with. The same thing happens to the brain if you go back too quickly.”

When kids are ready to return to their sport, Falcone advises returning in stages. After rest, kids can move into light aerobic activity. If that goes well and the symptoms don’t return, they can progress into more sport-specific activities like skill drills, and so on. If symptoms return, children should scale back their activity and return to their doctor.

On the Front Lines
Long-term supervision is key in concussion recovery, particularly under the watchful eyes of your doctor, or with help from two local head injury clinics.
CCHMC offers a multi-disciplinary approach to head injuries. “In the past, kids with head injuries would either not get referred anywhere, or else get referred to neurology one time, maybe get referred to sports medicine, all sorts of places,” says Falcone. “We realized that even within Children’s, depending on who you saw, you could get referred to different places. So it was very inconsistent.”

The CCHMC clinic, which can be reached at 513-308-HEAD, is staffed with doctors specializing in neurology, and sports medicine and rehabilitation to provide detailed assessments of symptoms and offer guidance on returning to activity and full-on competitive play.
The Heads Count program offered by TriHealth’s athletic trainers and Group Health Associates’ physicians keep student athletes at play. Spearheaded by Lakhia and Greg Lynn ATC, program manager, Heads Count aims to both prevent concussion through education and awareness, and treat concussion with individualized care. “We really strive to develop a comprehensive program that starts from the beginning in terms of providing community lecture and awareness,” says Lakhia. Heads Count staff works with teachers, parents and coaches to ensure that initial treatment of a concussion on the field is handled properly and that players get timely care.

The program also administers what is called an ImPACT evaluation (Immediate Post-Concussion Assessment and Cognitive Testing), a computerized test designed to measure things like memory and reasoning. “I tell parents it’s essentially a stress test for the brain, just like a treadmill stress test for the heart,” says Lakhia. Students in the program take a baseline test, and then re-take the test after they are no longer symptomatic, which helps the Heads Count team coordinate further recovery. A similar program is in place in Northern Kentucky through St. Elizabeth Healthcare (stelizabeth.com/sportsmedicine/impacttest.aspx).

Heads Count has been well received, according to Lakhia, and currently works with several Cincinnati schools and athletic organizations. For details on getting your school or team involved, call 513-246-7953.

At the End of the Day
When it comes to concussions, both Falcone and Lakhia say more education is needed. “Lack of knowledge is the main obstacle in managing concussion effectively,” says Lakhia. “We’re trying to prevent two things — we’re trying to prevent the potential catastrophic injury that can occur with a repeat concussion if it happens too soon, and we’re trying to prevent long-term issues that the student athlete has to suffer, whether it’s depression or headaches, or staying out of school. It’s really unnecessary if managed appropriately and correctly.”

Sherry Hang is editor for this publication.