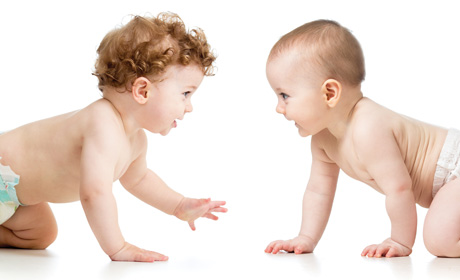 When my 14-month-old daughter puts her arms around my neck and lays her head contentedly on my shoulder, it’s hard to imagine she needs much more than the love, care and affection of her parents. But when we take her to a gathering where there are other babies and young children, I know better. She connects with them in a way she cannot connect with me. She watches them in rapture. She tags behind the older ones and explores playing and sharing with those her own age, oblivious to my presence. I realize this interaction is something she truly needs and enjoys — for children speak to each other in a language adults have long since forgotten.

Parents who stay at home with their babies and toddlers have a challenge they may not have considered in those early days of nighttime feedings: we all need friends.

Marguerite Kelly’s a mother, grandmother, syndicated columnist and author of parenting guides. “Children learn from each other,” she writes in The Family Almanac (Touchstone; 1994), “and they love to learn.” Most young children between the ages of 1 and 2 thrive in a playgroup. She suggests they be made of about four children who are no more than four months apart and are approximately the same weight.

Heather Gerker, Director of Professional Development & Training at Children, Inc., suggests that the best age for a playgroup might depend on the type of group you’re considering. “As babies grow out of the sleepy newborn stage and into the second and third months of life, they become much more interested in the world around them,” says Gerker. “Play time for babies at this age is about back and forth interactions with an adult caregiver — from singing a song to smiling and talking during a diaper change. At three months, they begin to move their bodies with a bit more purpose. They become more interested in exploring toys and will soon start reaching for their favorite rattle or stuffed animal. Often, playgroups for this age include a very active parent learning new ways to ‘play’ with their babies. These are more parent education or infant stimulation groups rather than ‘playgroups.’ For toddlers, there’s often more parallel play at playgroups instead of play with each other. Even though they’re not playing together they’re watching and often imitating each other. This is a great socialization time for them, even though it may appear as though they are not socializing at all!”

Most older babies enjoy seeing other babies and children, but at what age does it become an actual need for interaction with them?

“Play time’s fun and it’s critical for your child’s development,” says Gerker. “It’s your child’s work and their way of learning about the world. Through play, babies and toddlers try out new skills, explore their imagination and learn about relationships with other people. While this takes place at home with parents and siblings, it’s even more encouraged when with peers of similar ages. Often, an older sibling or parent will direct playtime for a baby or a toddler. I know my 5-year-old is always bossing my 2-year-old twins around! When in a small play group with children of the same age (within four to five months of each other), the children are more likely to explore new ideas or behaviors.”

By 20 to 24 months, toddler play has a strong verbal component, and playmates often describe play activities to each other or attempt to influence the role their partner should assume. By 2- to 2-and-a-half years, play is even more coordinated, as reflected in their ability to engage in complementary roles, such as chaser and chasee in a game of tag.

Although most toddlers will respond positively to other children, shy children may need encouragement to participate in group play.

“I think it’s most important to always follow your child’s lead when in new group or social situations,” advises Gerker. “If he hides behind your legs or doesn’t want to leave your side, you can help him explore from the safety of your arms or lap. Keep yourself calm and remain positive (children always pick up on the energy of mom) and model the behavior of exploring the environment yourself. If you notice your child’s still very uncomfortable, take him for a walk around the room or sit further away from the group where he can observe but not feel overwhelmed.”

She continues, “The way children approach and react to the world around them is often referred to as their temperament. One aspect of temperament has to do with how a child approaches and reacts to new situations. For example, very flexible children will often be eager to approach a new group of children while children at the other end of the spectrum are more cautious and tend to prefer just one or two familiar people to play with. Most children fall somewhere in between. One temperament is not better than the other, they’re just different. As parents, our role is to understand where our child may be on the temperament spectrum, and encourage his strengths while supporting the areas where he needs help. With a shy toddler, you might be tempted to quit the playgroup, but this might not be best for either you or your child. The play group’s an opportunity for you to support your child in an area of development that he’s showing you he needs help and it will help your child learn to approach and react to group situations in a more positive way.

“A few concrete ways to handle this situation might be: 1) Arrive at the playgroup early so your child has time to explore the environment before more children arrive. 2) Plan one-on-one play dates with another toddler from the playgroup in between the larger group meetings. 3) Keep in mind it’s very common for toddlers to play next to each other — called parallel play — instead of with each other. Even though they’re not playing together they’re watching and often imitating each other. And 4) When your child begins to be more active in the group, step back and try not to interrupt him (this will build his confidence)!”

Playgroups aren’t the only option for toddler socialization. For parents desiring a more structured social setting, there are a number of classes for babies and toddlers which the parent or guardian also attends, like those offered at Kindermusik or Gymboree. Visit the “Mommy & Me” directory online at cincinnatifamilymagazine.com for details on local programs that provide socialization opportunities for tots.

Rarely have parents never faced an episode of toddler biting, pinching or hitting. Until toddlers can resolve conflicts verbally, it’s reasonable to expect a tug of war over toys, a hostile takeover of a tricycle and even some tooth marks on a cheek or shoulder. “First, take a deep breath,” advises Gerker. “Squabbles amongst toddlers are very common. Many toddlers aren’t yet capable of telling each other how they’re feeling, so it’s important to model the appropriate language for them. For example, Sally takes Tommy’s truck. You can help Tommy by suggesting he say to Sally, ‘Please give me back my truck,’ and then you can redirect Sally with a different toy. Simply telling toddlers to ‘use their words’ is often not effective. They need to hear what those ‘words’ might be for the given situation. These moments should be expected, and keeping in mind that even conflicts are a great learning experience is important for all parents.”

Remember, play is child’s work. By providing companions, you’re not only making your child’s job more exciting, you’re paving the way for a lifetime of friendships.