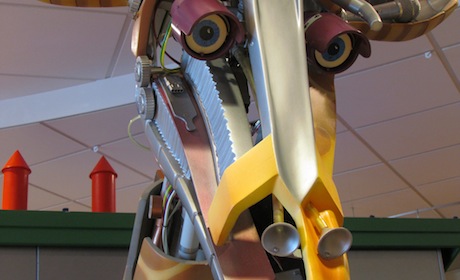 Libraries are traditionally thought to be the quietest buildings in town, but the Boone County Public Library has been turned into a zoo – literally. The Robot Zoo, a giant traveling exhibit of, well, robots, has parked in the Burlington, Kentucky, branch of the Boone County Public Library (1786 Burlington Pike), and plans to stay for a while. The exhibit hosts over 15 stations with interactive games, educational boards and larger-than-life animal models. It houses eight animals total: a chameleon, giraffe, fly, grasshopper, giant squid, rhino, bat and platypus. 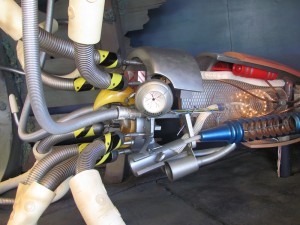 The Robot Zoo, designed as a visual learning tool for children ages 4 to 12, displays detailed models of carefully chosen objects, all of which come together to showcase the biomechanics of different creatures. In front of each giant robot stands a sign with information about its anatomy and what features make it unique: the dozens of eye tubes demonstrate the fly’s spotted vision, while the microphones in the giraffe’s ears hint at how it detects sound. 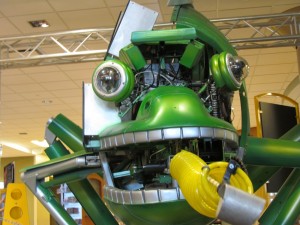 While the exhibit itself is pretty unusual, perhaps the most interesting aspect is how this 5,000-square-foot zoo fit into a library. “Most libraries have not been able to hold an exhibition of this size and capacity,” says Christi Klingelhefer, Venue Sales Manager for Evergreen Exhibitions, which owns the zoo.

But as Klingelhefer says, a library is the perfect place for these creatures. “The exhibition was based on a book called The Robot Zoo, published by Marshall Editions in London,” she says. “It is a perfect fit to be on display in a library.” 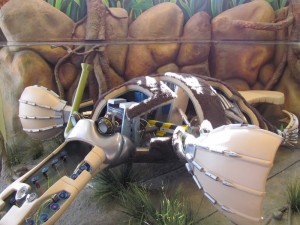 According to Becky Kempf, Public Relations Coordinator for the Boone County Public Library, the exhibit is just what they were looking for in a new program. “We thought … it’s time to put something else in the building to try to bring more people into the building,” she says. “Considering that this is a community center, we wanted something extra to do while you’re here, besides browsing for your books.” 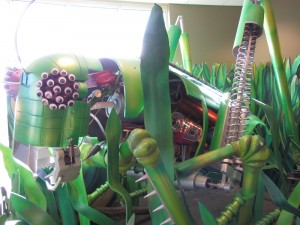 Shawn Fry, assistant director of the Boone County Public Library, says they wanted something new. “What we’re doing is always looking for new ways to use our space, to bring people in, to excite people,” he says. “We’re kind of pushing a boundary in how the community wants to use this space and the interaction and what they can get out of that time.”

The Robot Zoo will be at the Boone County Public Library through February 28, 2016. Admission to the zoo is free, thanks to community sponsors, and the exhibit is open during normal library hours.  Call 859-342-2665 or visit bcpl.org for more details.

Kerry Skiff is an editorial intern for Cincinnati Family and NKY Family magazines and a student at Northern Kentucky University.