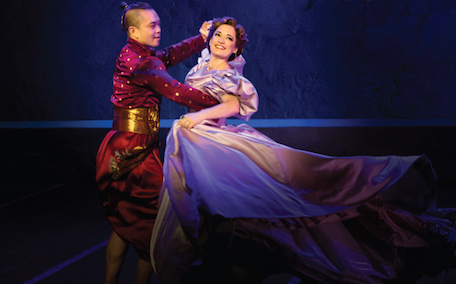 “Something Wonderful.” The title of Lady Thiang’s (played by Joan Almedilla) moving tribute to her husband, not only describes the King of Siam (played by Jose Llana), but also this revival of Rodgers and Hammerstein classic, The King and I. Part of the Broadway/Cincinnati series now playing at The Aronoff Center through April 22, the tour reveals not only the warmth, wit, and beauty of the musical, but also its continuing relevance.

While The King and I premiered in 1951, and is based on Anna Leonowens’ memoirs of teaching in Siam during the 1860s, its themes of women’s equality and cultural diversity remain current. Its strong women include not only Anna (played by Elena Shaddow), the respected schoolteacher to the king’s children and wives, but also the dignified Lady Thiang, and the independently-minded female slave, Tuptim (Q Lim).

Tuptim reveals this independence through “The Small House of Uncle Thomas,” the play she presents at the King’s reception for European ambassadors. A retelling of Harriet Beecher Stowe’s abolitionist novel, this ballet criticizes Siam’s practice of slavery, but also celebrates Asian culture through its use of masks, style of dance, and minimalized set pieces.

The King and I itself also makes use of sparse set pieces, allowing the audience to focus on characters and songs. “Shall We Dance” takes glorious advantage of this, with columns of the palace moving as the music swells and Anna and the King glide across the stage.

And it is of course the musical numbers that make The King and I such a perennial favorite. The audience falls in love with Anna as she reveals her fears, and her cure for them in “I Whistle a Happy Tune.” And “Getting to Know You” is an infectious celebration of Anna’s joy in teaching and learning. LLana’s voice gives power and wit to “A Puzzlement” revealing the King’s struggle with a world where people will “Fight to prove that what they do not know, is so.” Meanwhile, the King’s own blindness to true love leaves Lun Tha (played by kavin Panmeechao) and Tuptim to hide their romance and sing “We Kiss in a Shadow,” a duet that beautifully blends Panmeechao’s deep baritone with Lim’s lovely soprano. And, of course, there’s the warm ballad of love that evokes tears, because Almedilla’s singing is “Something Wonderful.”