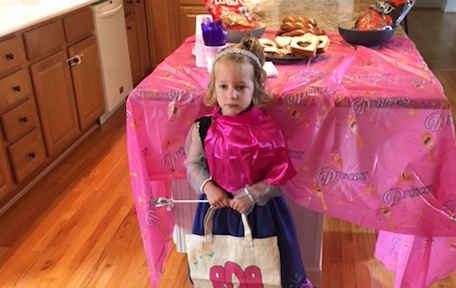 Sister Bear was overwhelmed and had “Too Much Birthday.” I feel for her every time I read that book.  That is why I opted to keep a low key birthday for my 4-year-old.  She wanted a princesses themed tea party.  Everyone was encouraged to wear either their favorite princess outfit or a pretty dress.  We invited three friends who we see on a regular basis.  All the girls came in their attire and had fun prancing around for the first 15 minutes.  I kept decorations simple and for 20 bucks, the Dollar Store did a rather nice job.  I bought princess plates, napkins, flatware, cupcake holders, streamers, a table cloth, etc. It was rather hot out so we just ate at my kitchen table. I used a heart cookie cutter and cut out peanut butter and jelly for the girls.  I also had chips and pretzels and fruit on a kabob stick.  For some reason that made the fruit more appetizing and my kids have since requested fruit on a stick.  I was going to make the cake but Kroger did a fine job so I went with that! For the parents I had chicken salad.  We also had pink lemonade that we poured from a tea pot.  Again it was simple but the girls seemed to enjoy it and my daughter liked the menu. 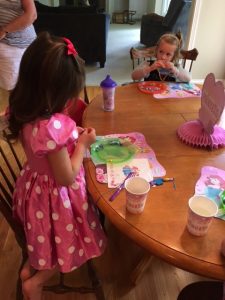 As far as activities went, we made beaded necklaces on a shoe string that were big enough for the girls to do independently and decorated party favor bags with gems and princess stamps.  Those two activities took up a good bit of time.  I had a start and end time for the party and planned out a certain amount of time for each activity like photos, eating, crafts, gifts,a game, free play, etc. Though the timing was not perfect it was helpful to have it structured so the girls did not get too wild. I think guests appreciate a start and end time too so that they can get on with their day or be home for other siblings and naps.  Everyone stayed a little later than the scheduled end time but it was still good to have.

We played a version of Pin the Tail on the Donkey called Put the Sugar in the Tea Cup but the concept of the game was over their head.  The blindfold and spinning around made my daughter upset so everyone just put a sugar cup in the tea pot.  Oh well, at least we tried! 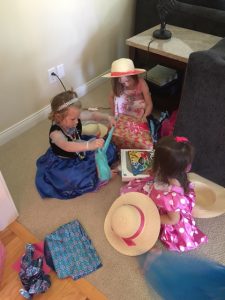 I opted to incorporate the party favors into the party activities and not send home candy. The girls decorated their bags and took home necklaces, a bottle of nail polish, and hats that had a pretty bow on them.  This kept it personal and simple!

It was fun and simple! I did not feel stressed and enjoyed myself.  I also felt like we did not break the bank on this birthday party.  I am not saying a big party is bad, but for this season and my personality a low key birthday party was a home run for everyone.