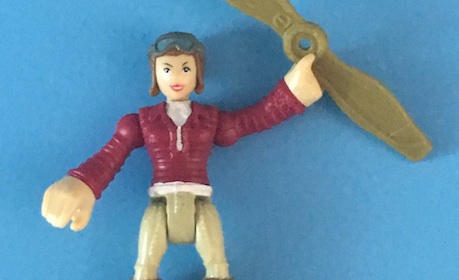 Upon first meeting me, I’m doubtful you would guess that I love The Simpsons, South Park, and crude humor. But(t), I do! We are all multi-faceted creatures, and one of my lesser known facets is apparently that of a teenage boy who laughs at fart jokes. Bring on the scatological humor, and you’ll hear me giggling uncontrollably. It’s not something I’m proud of, but it’s who I am.

Now that I’m a mom, I have to repress this part of myself, and also attempt to discourage it in my sons. “This is Amelia AirFART, she flies planes, Mom!” I take a breath, give my son a mental high-five for making such a well-executed fart joke (accompanied with tooting sounds), and say “You are so silly! Her name is Amelia Earhart though!” And then redirect the conversation into something educational, of course … “Did you know she was the first woman to fly a plane across the Atlantic Ocean all by herself?”

At some point this summer, the potty talk got excessive. We tried using a three strikes, you’re out approach. If we heard three potty words (butt was the word of choice), we would not do whatever fun activity we had planned that day, we would go home, or put away toys (depending on what we were up to that day). And you know what? It wasn’t working … at. all. We noticed the desire to say silly words far outweighed anything else. Sooooo we are approaching this a bit unconventionally. If the boys are good all day long, we will have silly time first thing in the morning as a reward. We wake up, say butts a thousand times, dance around in our pajamas and get uncontrollable giggles, which usually end up in hiccups. The rest of the day is buttless, and I can take my kids out into public knowing we are in the clear from potty mouths. We are setting private and public boundaries, and I figure this is just a phase that will run its course.

Being a parent is tough. There are SO many things no one will tell you, including the fact that your child WILL say something wildly inappropriate in public that will make you blush, and also that there will be times you have to turn your head away from your kid, release a laugh, and then turn back scowling, telling your child that what they just said is inappropriate and not allowed.

Kids say the darnedest things — do you remember the first time your child uttered something that made your jaw drop? How do you curb potty talk in your home? Sound off in the comments!