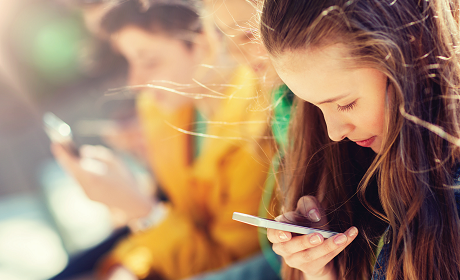 The moment your kindergartner comes home and suddenly changes the way she walks, what she chooses to wear, and to your surprise, her language, it starts. What happened? Peer pressure.

It’s something we all face from day one, and before you know it, your kindergartner is a teenager with an all-new attitude and group of friends. It doesn’t have to be scary. Peers include close friends, same-age cousins, kids at school, church or on a team. All of these will have influence — whether positive or negative — on your kids. The good news is, you can teach your kids how to recognize peer pressure early on and you can model individuality to them: these tools will be gamechangers for them later on in life.

According to Colleen Furey, PSD, a licensed psychologist who works as a behavioral health consultant for Mercy Health Kenwood and West Chester Primary Care and Pediatrics, research shows there are two different kinds of peer pressure, and it begins when a child begins to develop early on.

The time when your child begins to develop mentally and begins paying attention to peers is when it all begins. According to research, this is during the preschool ages. Peer pressure peaks in the adolescent years, Furey says, but oddly enough, it begins to wean around ages 17 and 18 years old — just in time to be on your own and off to college.

We are naturally attracted to people with similar interests or people we just admire. It’s completely normal. We surround ourselves with peers. Kids have developing brains and as they grow, they attempt to figure out how to be a part of society in the big world. However, your kids’ biggest influence and role model is you.

“As they get older and closer to that early adolescence, it really shifts to how the peer group is really that big influential model,” says Furey. “Their brains are really trying to use all of this information to try and figure out how to function and how to thrive, but of course it could be problematic when the influence is something negative.”

It’s all fun and games until they are teens — this is when peer pressure can get a bit more risky. Teens tend to be pulled into common pressures including: health, (diet and exercise); risk behaviors (alcohol use, vaping); academics (how much they value homework); dating and sexual activity; and music and fashion, which you may notice more with girls. Although there is no research proving that one gender is more influenced than the other, research does show that boys tend to be more influenced by a group of peers, whereas girls focus more on just one or two besties. And, surprise, boys are more of the risk takers.

When to Step In

So when does a parent need to step in? This can get a bit tricky — the last thing you want to do is close your kids off from you or go mute. You want to build trust and allow them to be open about their feelings, so choosing the right time, style and approach can help. According to Furey, age-appropriate conversations are necessary.

“Whenever we are explaining tough topics to kids, we want to make sure the way we are delivering that information is developmentally appropriate,” suggests Furey.

A typical conversation with your child can start simply with an open, honest conversation about peer pressure, according to Furey. Even sharing your own personal childhood stories is one way of getting through to your child, and that story just might be the topic that hits home. Before you begin, keep your kids’ ages and personality types in mind. For example, if one of your kids tends to gets uncomfortable with lectures, try a different approach. For younger kids, picture books, TV shows and movies that highlight individualism can create a solid message.

Yes, The Breakfast Club, Mean Girls and Ferris Bueller’s Day Off are all great, classic movies, and for older kids and teens, they are conversation starters, too. What do they have in common? Peer pressure situations. Use media to help ease you into that natural, open conversation simply by asking questions like, “How could have that character handled that differently?” or “What were the consequences of his action?” Maintaining a good, trusting parent and child relationship is everything.

According to Furey, although research shows that peers play a more important role in life during adolescent years, your relationship with your child is the foundation.

“The child/parent relationship really serves as a bumper,” assures Furey. “The research shows at the end of the day, when they are standing up to peer pressure, the variable that makes a difference is what the relationship is like with their parents.”

Being assertive, modeling your own healthy relationships and standing your ground can show positive behavior for your child in everyday life situations. It’s also important to consider getting to know their friends and their peers’ parents, too.

It’s Not All Bad

“Kids who are around leaders and who are more influential, are more likely to make good choices,” says Furey.

If you feel like your child is shifting to negative peers, try and explore a new activity or get involved in a volunteer organization in place of the negative peer group trying to lure him in.However, this approach can only go so far. Teens will be teens.

It’s shown that putting a kid who is involved with negative peers into a group of positive peers, may not have that “ah-ha” impact you had hoped for. They are likely to go to find a new group of not-so-good peers anyway. So hang on tight for the ride, and ease into this approach with a little TLC. Aim to be a positive role model from the get-go, and surround your kids with solid people who can help guide them in the right direction when it’s needed.

• ROLE-PLAY with your kids to help them know what to say when they’re asked to do something they don’t want to
do.

• PRAISE your kids and celebrate their achievements. Kids with high self-esteem are able to resist pressure.

• HELP your kids choose friends with good values and self-esteem.

• CREATE code words — these are words your kids can use when they want your help but don’t want their friends to know.

• USE YOU as an excuse, in other words, they can refuse pressure by saying, “My parents will ground me for a month if I do that.”