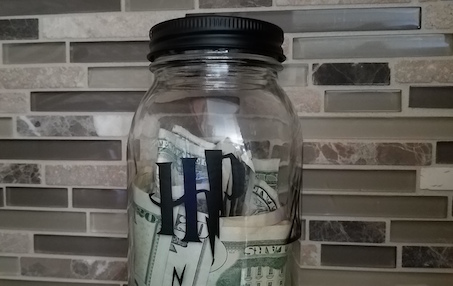 Some may call my husband and I crazy, but we told our kids that we are taking our first family trip to Orlando … in November! We have been saving money for this trip and we decided we wanted their input on it as this is not just our memory, but it is theirs too! We sat them down and gave them two options…we could go to Disney or to Universal. We had a family discussion and took a family vote. We unanimously voted to go to Universal. This didn’t come as a surprise as both of my kids have been a bit Potter obsessed for the last year.

To make a long story short, we told our kids 8 months in advance that we are going to visit Hogwarts and Jurassic Park. It wasn’t a decision my husband and I took lightly. We knew that telling a 4 and 7-year-old 8 months in advance would begin the mass amounts of, “Is it time to go yet?” and “How much longer?” We debated on doing a fun “morning of” revel to capture their excitement, but in the end decided we would take the 834,927 “is it time yet?” questions.

Now with four months down and four to go, we have answered many questions, but not nearly as many as we thought we would have. In the past four months, my kids have created a “sum jar”, as they have named it, and have put the money they have earned in it. I have used my Cricut to make fun Harry Potter themed decals for it too as a visual reminder for what they are working for. If we would have told them the morning of, they each would have had about five dollars of spending money squirreled away in their rooms, which would not buy them much at Universal. Our choice to teach them delayed gratification has also turned out to be a lesson in saving money which is an important life skill too. They surprisingly have been quite disciplined in saving their money for souvenirs and have suppressed their impulses to purchase the random toy at the grocery checkout. They are currently at a combined $120 with four months to go!

As much as I would have loved to plan a fun day of revel, I am pleased with our decision to share our family trip with our kids and get their input. It has also been eye opening for my kids to see that a trip doesn’t come by snapping your fingers, instead they have learned how much time, money saving and effort their dad and I have put into planning this vacation. I encourage you to consider sharing exciting news or a fun trip (even a local one!) with your kids in advance so that they can practice delayed gratification.