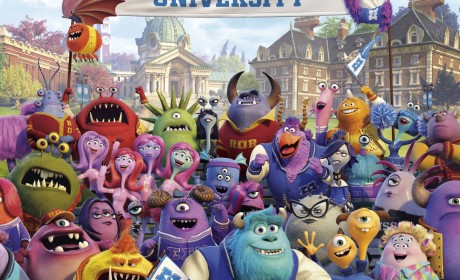 You got to know Mike and Sulley in Monsters, Inc. Now you get to find out how they became the best of friends in Monsters University.

Here’s their SYNOPSIS: Ever since college-bound Mike Wazowski (voice of Billy Crystal) was a little monster, he has dreamed of becoming a Scarer — and he knows better than anyone that the best Scarers come from Monsters University (MU). But during his first semester at MU, Mike’s plans are derailed when he crosses paths with hotshot James P. Sullivan, “Sulley” (voice of John Goodman), a natural-born Scarer. The pair’s out-of-control competitive spirit gets them both kicked out of the University’s elite Scare Program. To make matters worse, they realize they will have to work together, along with an odd bunch of misfit monsters, if they ever hope to make things right. Screaming with laughter and oozing with heart, Disney•Pixar’s Monsters University is directed by Dan Scanlon (Cars, Mater and the Ghostlight, Tracy), produced by Kori Rae (Up, The Incredibles, Monsters, Inc.) and features music from future Rock and Roll Hall of Fame inductee and award-winning composer Randy Newman (Monsters, Inc., Toy Story 3). For more information, like us at facebook.com/PixarMonstersUniversity, and follow us on twitter.com/disneypixar. The film opens in U.S. theaters on Friday, June 21, and will be shown in 3D in select theaters. For more information, check out disney.com/MonstersU.

Here’s what we thought about it: We arrived early to get the best seating as we had our 3- and 7-year-old kids with us. We grabbed our 3D glasses, got some popcorn and a drink and settled into our seats … after going potty a few times, too. As soon as the lights went down, the kids got excited. They didn’t move from their seats for at least 30 minutes. Entranced in the movie and taking in all that they could. This was the first movie theater experience for our youngest, and it couldn’t have been a better movie to start him off with. What little boy doesn’t love monsters? He was really enjoying the show and laughing at everything he thought was funny … which was just about every little funny face he saw or silly act. However, the show didn’t start until 7 p.m., so I knew that Mr. Grumpy would appear in my little guy at any moment during the last parts of the movie. So, be sure to see this movie earlier in the day. He started to get tired and wanted to go home. Usually, that would be it, as he would throw a fit. But, since I could tell him to watch this part of that scene in the movie, he was instantly re-engaged. He didn’t like wearing the glasses all that much, but loved the look of it when he did put them on. When the movie was over, all he kept saying in his cute little 3-year-old voice was, “That was AWESOOOOME!” He wants to see it again, but we will probably not go for the 3D again with him until he gets a little older.

On the other hand, our 7-year-old absolutely LOVES going to the movies. She was so excited to see this one, too, and she was not let down. There were a few parts that she did get scared, but then she was OK. It was great to hear her laugh out loud at the jokes and silly things that happened during the movie. She paid a lot of attention to each of the different monsters and kept saying how much she liked this one or that one. When we got home, though, she did tell me to shut her closet door.