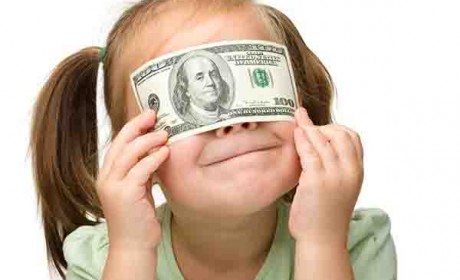 Using a jar system helps kids learn that money comes and goes quickly, but that they can have a say in WHERE it goes … and how quickly it goes … or NOT!

If you’d like a great way to teach kids about money but don’t know where to start, take a tip from Neale S. Godfrey, author of Money Doesn’t Grow On Trees: A Parent’s Guide to Raising Financially Responsible Children.

Here’s how it works.

1) An allowance is “work for pay.”
Set up a series of chores (very simple ones for the youngest, more responsibility for older kids).

2) Allowance is paid once a week, at a specified time (ritual is important).
Make sure that you have the money on hand, in small denominations. Allowance can be determined by the child’s age … so, $5 a week for a 5-year-old … but put a cap on this rule so you don’t go broke!

3) Divide the money into four jars for each child:

• Jar one is for charity or church (family members get to pick their own).
• Jar two is Quick Cash. Your child can spend this any way he wants (subject to family rules).
• Jar three is Medium-Term Savings, which means anything that costs more than one week’s worth of Quick Cash.
• Jar four is Long-Term Savings. For a child, this generally means a college fund.

TIPS to make it work:

• Make sure your first allowance structure is set up in such a way that you can take off 10 percent off for charity or church right from the start then divide the rest by three. Charity is an easy concept to explain to children, who are very aware that it’s good to help others. But it doesn’t come naturally … it has to be taught.

( Example: $3 for a 3-year-old breaks down to .30 cents for charity right off the bat, ninety cents for each of the other three jars.)

• Quick Cash can go for whatever the child wants to spend it on … within the limits of your family rules. It’s your kid’s money. She earned it, she can spend it.

• Make a Medium-Term Savings plan with your child. Help her choose something that represents two or three weeks’ worth of Medium-Term Savings. You’re teaching deferred gratification, but you’re also teaching gratification — and three weeks is a long time to a toddler. As the child gets older, set more ambitious goals. You can cut a picture from a magazine, or print one from the Internet, and tape it to the jar as an incentive.