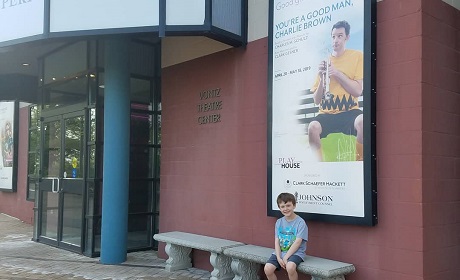 I have seen quite a few musicals in my lifetime, and so have my kids. I went on a mother-son night out to see Cincinnati Playhouse in the Park’s, “You’re a Good Man Charlie Brown.” I have never seen my 7 year old belly laugh so much during a musical. It was a BIG hit for both of us! 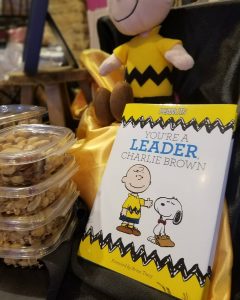 Having that time with Will before the show began was priceless. We arrived early – as recommended – so we can take advantage of some Charlie Brown-themed crafts before the show. Will was ecstatic to find out they were making kites. He immediately darted over to the table, followed the instructions, and cut and colored away at his paper kite. I loved watching his enthusiasm! They also had a “learn to draw Snoopy” station before you walked into the theatre.

We worked up an appetite and ordered some Peanut Gang-themed foods like peanuts and Linus sandwiches. Yum! We stood at the Linus table, chowed and talked. It’s not often that I get one-on-one time with Will. We are always on the go, plus his little 3-year-old sis goes where we go. “You’re a Good Man Charlie Brown,” is suitable for ages 5 and older due to the full length of the show. It runs about 2 hours and 10 minutes, with a 20 minute intermission. 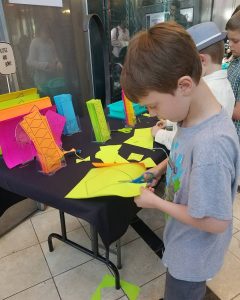 Will’s eyes lit up from beginning to end. The humor was so remarkably funny for adults young at heart and kids. Hearing my little boy laugh as much as he did made me laugh even more. It brought a smile to both of our faces, and I couldn’t get over the musical talent involved. We tapped our feet to songs like, “My Blanket and Me,” “The Book Report,” and “Happiness.” All of our favorite Charlie Brown characters were perfectly portrayed with a side of whit and delightful musical numbers. What a twist – all of the characters played a unique instrument throughout the play, which I found to be very fascinating!

As we came close to the final song, Will said, “It’s almost over already? No! I don’t want it to be over!” Keep in mind, we had already been there over two hours, which obviously didn’t phase him at all. After the show, random people commented on how much fun Will was having! I asked him who is favorite character was – any guesses? You got it. Snoopy! 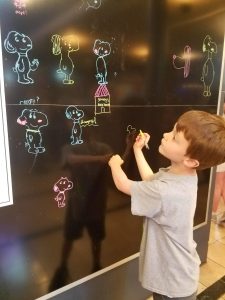 On special nights you get to meet-and-greet the characters! We were lucky enough to run into Charlie Brown and Lucy on our way out the door. Will was really grinning ear-to-ear as Lucy complimented his Minecraft shirt.

Playhouse in the Park’s whimsical, hilarious and heart-warming musical, “You’re a Good Man Charlie Brown,” (I got soft at the end when they shared an important message to the audience) goes on through May 18 at the Marx Theatre. Grab your tickets and your family, and get out to see this one-of-a-kind show! We are in love!

For tickets and for more information, go to cincyplay.com/productions/you-re-a-good-man-charlie-brown. 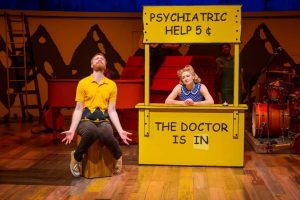