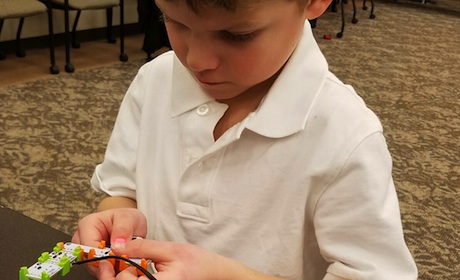 Calling all parents, PTO members, and schools that want kids to have some STEM* based fun during their school day. Check out Butler County Educational Service Center’s new TinkerTANK. Recently, my son participated in the first TinkerTANK makerspace night at Butler County ESC and he talked about it ALL weekend. I originally planned on dropping him off and heading out to meet friends for two hours, but I ended up staying and playing too!

The TinkerTANK provided five different activities for kids to rotate through during the two hours that they held the event. They had a Make. Do; LEGO; Little Bits; Ozobots; and a Dash & Dot rotation. They have more than just these activities available, they also have mobile carts with robotic technologies, building materials, a 3D printer and more. The best part, you can choose the activities you want your kids to do and they will bring them to you! 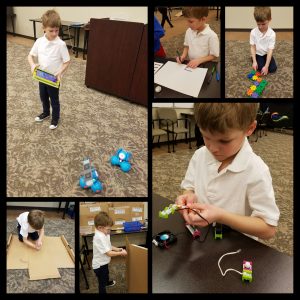 During the LEGOs station, my son had fun building with his favorite little blocks; using LEGOs to stamp patterns into Play-Doh, and using blocks and gears to create a building that turned. Next, he was off to the Make. Do station which was the lowest tech station out of all five, but every child loved sawing cardboard and using plastic screws and screw drivers to make their own creations. The best part of this station was watching all of their creative ideas come together. Some kids built houses and my son built an airplane. I added the cardboard screws, screwdrivers and saws to my wish list too.

Dash & Dot was a group favorite. Kids used iPads (what kid doesn’t love iPads?) to “talk” and direct their robot. They all got a brief introduction on how to use the iPad app and then they were off to figure out how to use it to make “Dash” move. My son figured out how to move “Dash” with his iPad pretty quickly and he thought he was funny bumping into my feet with it. His face held enjoyment and concentration!

For my son’s fourth rotation, he went to Little Bits. He read over the questions on the board and got right to work. His face lit up when he made his circuit buzz, ring like a doorbell, and turn on a light. He was SILENT as he was studying his pieces to figure out how to make it all work. I liked the open ended learning through trial and error until he figured out exactly how the circuits worked.

Finally, he rotated to Ozobots, where the first thing out of his mouth was, “Can I keep these?” He really liked the tiny robots. At the Ozobot station, he learned about coding and how to use the special Ozobot markers to create a maze for his tiny Ozobot to follow, change colors, and adjust its speed. I’ll be honest, I Googled how much they were as they were also added to my list.

At the end of the two hours of play, my son walked away asking when he could do TinkerTANK again. I am going to try to get TinkerTANK to visit his school. I will gladly volunteer to help with this fun and engaging experience.

*STEM–“STEM is a curriculum based on the idea of educating students in four specific disciplines — science, technology, engineering and mathematics — in an interdisciplinary and applied approach.”