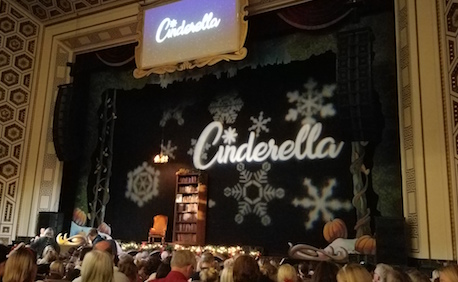 Are you looking for a creative gift this holiday season? Give the gift of experience and treat your loved ones to an event that will have them laughing and smiling. Gift them tickets to The Children’s Theatre of Cincinnati performances! 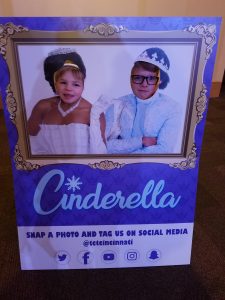 Currently, trampling the main stage at the Taft is Doris and Pearl, the stepsisters, in TCT’s British Pantomime of the childhood favorite Cinderella. Traditionally performed at Christmas, the British panto is a popular form of theatre that incorporates audience participation, song, dance, and current popular jokes.

My oldest was a little hesitant to go as he said he would be the only boy at Cinderella, but he quickly realized that there were boys and girls of all ages. Being a first grade boy, he thought it was hilarious that the stepsisters were really boys dressed as girls! Throughout the show, I could hear him belly laughing at the antics of the stepmother and the stepsisters. He also thought it was “so cool that they dabbed.”

Meanwhile, my daughter was mesmerized by Cinderella and could not take her eyes off her. Each time she sang, my daughter would squeeze my hand. The actor that plays Cinderella has an amazing voice; I will have to admit it gave me goosebumps a few times. One of the funniest parts to me was when the stepsisters went to the ball and my daughter looked over at me and said, “What are they wearing?” It was too funny! The ending was probably my son’s favorite part … “MOM! They are playing my jam!” He loves Walk the Moon’s “Shut Up and Dance” which had both my kids singing and dancing. 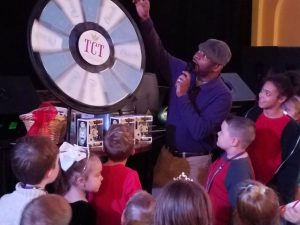 Wait, there is more! Do not just visit the Taft for the show, sign your kid(s) up for the Kids Club, the membership is $30, and enjoy a special treat, trivia, coloring, and special photo opportunities prior to the show. After the show, Kids Club members have the opportunity to meet some of the stars! My kids were excited to meet Cinderella and Prince Daniel after the show, get their autographs, and pose for a picture with them to finalize their fantastic trip to see TCT of Cincinnati at the Taft.

Hurry up, go to thechildrenstheater.com, and purchase your tickets for one of the shows! You will not regret it! TCT of Cincinnati’s Cinderella performances are: 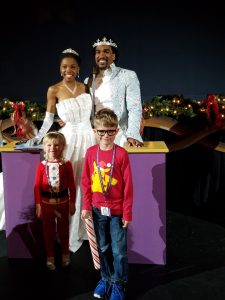 *Does your child get easily over stimulated or have sensory concerns? Look into tickets for the “sensory-friendly” performance of Cinderella on Monday, December 18 at 9:45 am.