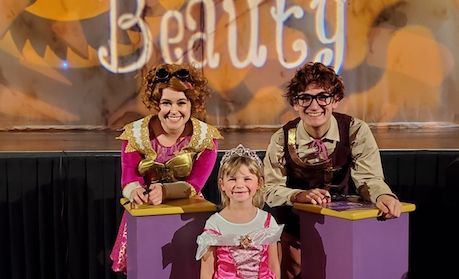 The Children’s Theatre of Cincinnati has another great production; this time their rendition of Sleeping Beauty! It’s a bit fairy tale, a bit rock and a bit of steam punk all rolled into one. It also includes a live band and G-rated humor for younger audiences and adults.

My little princess was excited to see spunky Aurora, aka Sleeping Beauty, and was pleasantly surprised to see five other princesses, too! As usual, the singing and dancing was fantastic and held the attention of guests of all ages. The costumes were well thought out as well. I recommend looking closely at the Prince Charming’s costume; check out the gold item hanging from the prince’s costume, it made me chuckle! The show was over before we knew it, and as the actors began to bow, my daughter said, “Wait! Please don’t tell me it is over already?”

Without giving too much away, the production included many of the “typical” fairy tale themes, including princes and fairy godmothers, but also included some very powerful messages. My five year old didn’t directly pick up on the messages, but I did. This gave us plenty to talk about on our way home. The themes I picked up on during the show included messages about embracing your differences, waking up and seeing the beauty around you, and being a strong independent female! As a mother of a young girl, I loved being able to follow up the show by asking her about the beauty she finds in the world, what makes her different and beautiful, and what makes her a strong role model for her friends.

TCT’s Sleeping Beauty is another show you don’t want to miss! So “WAKE UP” and purchase your tickets today before it is too late! Sleeping Beauty will be at the Taft only until May 5!  For more information about tickets and upcoming performances, go thechildrenstheatre.com/mainstage/shows. 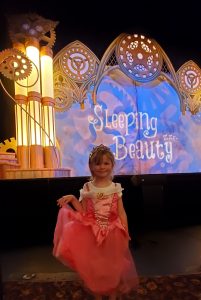