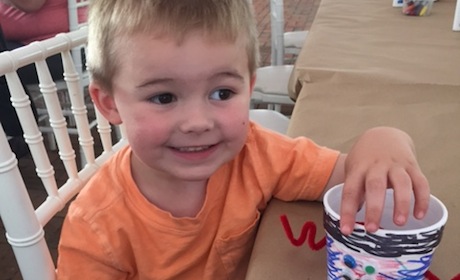 Being an elementary school teacher and a mom of two, I like to get out and participate in fun activities as much as possible. My oldest son, Leo, is almost 3 ½ years old. I also have a son named Blake who is just an infant.

When I heard about Sunday Funday at the Taft Museum of Art (316 Pike St.), I was intrigued by the description. Crafts, animals, art, and a puppet show …  I’m in! Of course football was on during the same time as the event, so the hubby and I decided that Leo and I would go to Sunday Funday, and he and Blake would watch the Bengals play on T.V.

As Leo and I pulled into the free parking garage next to the museum I was instantly pleased that I didn’t have to walk far, or pay to park! Upon arrival we got “Taft” stickers that we were supposed to place on our shirts for entry. Of course Leo didn’t want to wear a sticker on his shirt because I asked him to, but the museum employee quickly informed me that I could simply just wear both stickers. This instant flexibility made me realize the staff understood kids! We were handed a couple brochures explaining the times and events going on and we proceeded through the doors. 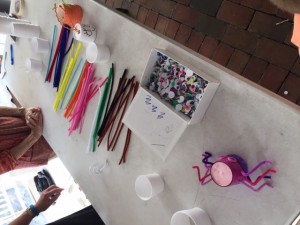 We entered a courtyard area covered with large white tents. It was a beautiful day, and we were pleased to be outside. This was the craft area and I couldn’t wait to see what the Taft Museum of Art had in store. As we walked up I noticed it was already fairly crowded. We waited in a short line to select Leo’s supplies. We got half of a Styrofoam cup (they were pre-cut horizontally), a red pipe cleaner, and four plastic eyeballs. The children were allowed to choose their supplies (within reason of course). The museum had completed models of the craft out on the table which I liked because it allowed me to not only tell Leo what we were going to be doing, but I could show him some ideas. 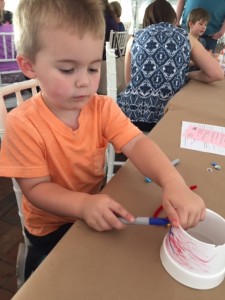 Next, we proceeded to the tables but we couldn’t find two seats together. Luckily, a family moved over some allowing Leo and I to both have a seat. When we sat down at the table there were bins of permanent markers of various colors, and liquid glue. Being the mom of a 3-year-old I knew this could mean instant trouble. I asked Leo what color marker he would like and handed over what soon could have been a mother’s kryptonite. However, to my surprise Leo was very careful with the markers, he just had a difficult time holding the cup sideways and coloring. I helped him and we were finished coloring in a few quick minutes. He was then eyeing the glue! One eye on, two eyes, three, and four. We were done quickly and only had the pipe cleaner left to stick through the middle. This was also difficult for Leo to do independently, but we were able to finish up his cup monster together. I looked at my watch … oops, only about 10 minutes had passed! We did have fun, but I was hoping for the craft to take us awhile longer. 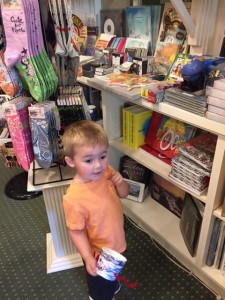 We proceeded back inside. Leo fixated on the gift shop and we ended up exploring it for 10 to 12 minutes. He enjoyed looking at all the interesting trinkets, gifts, and unique items they had … truthfully, so did I. We played around with some items like little trucks made out of what appeared to be recycled metal, a magnetic sand timer, and a globe. There really were some cute gift ideas in there!

We left the gift shop and began to walk around some more. Although we still had over a half hour until the Legend of Sleepy Hollow by Madcap Puppet’s performance began I noticed families already beginning to take their seats, so Leo and I also grabbed our seats in the front row. After a couple snacks I packed, talking to some of the other families, and playing games on my cell phone, the hall really filled up. Just prior to the show beginning I counted the Taft’s 85 chairs were almost completely full with a few adults standing around and lining of the walls, and about 30 – 40 kids sitting on the floor up front. It was packed, but it didn’t feel overly crowded to me since we were in the front. 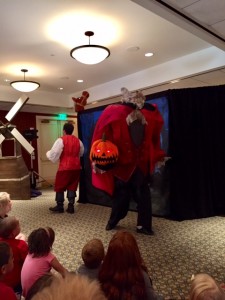 Now let me tell you … Leo has never been to a movie; he watches T.V. on and off, but doesn’t watch for an overly long period of time. He has been known to wiggle around at group time in his preschool class, and I had a hard time getting him to sit at the public library when there was a performance over the summer, but he was GLUED to this performance. He watched intently, laughed appropriately and showed the cutest facial expressions as the various puppets appeared or the characters came to life through their exaggerated gestures.

He LOVED it! The show lasted about 40 minutes and it was only in the end that Leo began wiggling around. We clapped and Leo turned to me, “Mom, let’s do a puppet show at home!” The show was wonderful. They included two children from the audience for minor parts, and really kept the children’s attention.

We had some time to kill as the “spooky” animals from the Great Parks of Hamilton County were not due to arrive for a little while longer. I noticed on my brochure that there is a self-guided tour, and an art cart on the second floor of the lobby. 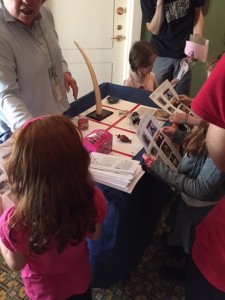 As we approached the art cart we were told that this specific activity would be too difficult for a child of Leo’s age. I did, however, pick him up and we watched as older children (maybe 6 – 8 years old) matched physical items with photographs of various art pieces. They seemed to do the activity rather easy, and while I do agree with the staff member that it wasn’t the most age appropriate thing for Leo, I think he would have been successful overall.

Leo and I began walking around, and instantly a large map caught his eye. There were little magnifying glasses to use with the map and Leo quickly grabbed one for himself and one for me. We looked at the map together and he found a “pirate ship” and “his house.” I remembered I asked a staff member, “Why do you have Sunday Funday?” and her reply was that, “It’s a way to get children exposed to the museum.” I was glad Leo was being interactive with a piece in the museum. 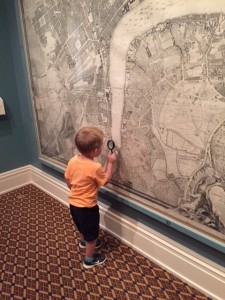 We headed back outside and waited for the “spooky animals.” Soon enough they were ready! The first animal that was brought out was an owl. The staff member from Great Parks of Hamilton County was very knowledge, kid-friendly, and did a great job at addressing the large crowd. However, because the crowd was large it was difficult to hear her at times. She engaged the children with questions such as, “What makes an animal spooky?” She had a sound machine with her to demonstrate to the children some different animal sounds, but we couldn’t hear the machine because the craft was still going on right next to us (also in the big, white tents) and the crowd was spread out across the area. The owl was interesting to see up close and Leo was very engaged in watching it. We discussed if we liked owls, how they fly, what they eat, and how they are nocturnal in a mommy/Leo sidebar conversation. Next a corn snake was brought out. Leo also wanted to see this animal but his attention span was diminishing while his hunger was increasing so we headed out.

The next Sunday Funday at the Taft Museum of Art is on November 20, from 1-4 p.m. Third Sunday Fundays are free with no reservation required. Get more info at taftmuseum.org/events/fundays.