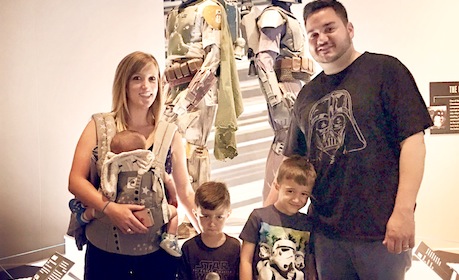 I’ve come to terms with the fact that there is a little bit of a learning curve as a mother. Not only have I had to learn how to best care for my young (one cry means a wet diaper, another cry means Baby is hungry); I have learned several new languages as my kids have aged. I can now speak construction, and know the difference between skid steers and excavators. I can now properly identify monster jam trucks, from A-Z (Alien Invasion – Zombie). And with boys ages 5 and 3, I am now knowledgeable on the intergalactic world that is Star Wars. Jakku, Hoth, and padawan are no longer jargon to me, as I have been taught several of the words and symbols of this world. As Star Wars savvy as I once thought I was, I am even more so after a visit to the current exhibition featured at Cincinnati Museum Center — Star Wars and the Power of Costume. 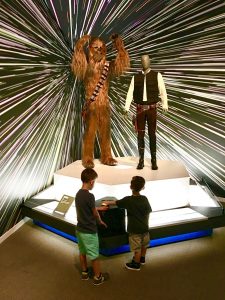 From conceptual drawings, artist renderings, hand crafted costumes, to interactive components — my entire family loved every minute of this exhibit! Viewing early sketches made us realize Star Wars is such an intricate world. We talked a lot about the fact that Star Wars is just an idea, dreamed into existence by a man named George. Mr. Lucas thought up this world and these characters using nothing but his imagination. Seeing real life sketches compared to the final vision seen in the movies was very inspiring!

Each family member had their own favorite aspect of the exhibit! My husband liked seeing the original Han Solo and Chewbacca costumes best. There is something special about standing in front of a real costume worn by an amazing actor in a huge franchise film that is awe inspiring. My 5-year-old son had two favorites — Boba Fett and the snow trooper costumes. “I never realized Boba Fett’s boots had spikes on the toes,” my son said as he looked up at me with amazement. We were very excited to see this costume in person, and take in the thoughtfully constructed details. My 3-year-old son liked all of the interactive components of the exhibit (read: pressing ALL the buttons), of which there were many. Pressing buttons lit up light sabers or made Chewbacca cry, and at the end of the exhibit we all stood in front of the interactive mirrors for about 10 minutes. We appeared transformed, we were dancing 3CPOs, storm troopers, and Darth Vaders. My baby enjoyed sleeping through the whole thing, and me? It’s a tie. I loved seeing the adorable little Ewok costume. I also could have spent all day taking in the detailed craftsmanship and thoughtfulness of Queen Amidala’s many beautiful dresses and battle costumes — they are truly works of art. 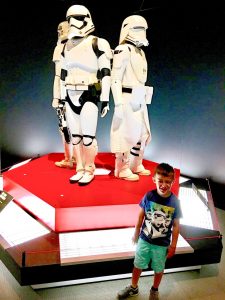 While I wasn’t always a huge Star Wars fan, I’m a mom who loves what my children are passionate about. My kids’ happiness and excitement is infectious to me, so I find myself bitten by the Star Wars bug. I give the exhibit two thumbs up, as does the rest of my family. We all learned something, and found ourselves wondering what type of dream world and characters OUR minds could come up with!

If you’re a fan of Star Wars you will obviously want to see this exhibit — but it is for more than just sci-fi fans. This exhibit delves into story telling and innovation, filmography, costume design, fashion, and even history! Overall, the exhibit is well composed and designed, and very easy to enjoy. I would love to visit again sans kids, to do an audio tour and learn even more. Thankfully, I still have time to do just that. I hope your Cincinnati Family finds time to see Star Wars and the Power of Costume before it blasts off to its next location in October!