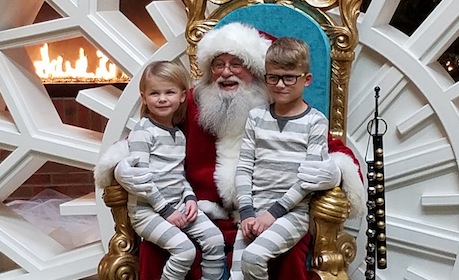 After our first visit, I knew we would be back each year. This year was our third trip to see the man in the red suit at Liberty Center, and for the third year in a row, my children and I all left with smiles on our faces. In an effort to beat the crowds and to avoid waiting in long lines, especially after a long day of work and school for the kiddos and me, I try to take them up to visit St. Nick shortly after he arrives at Liberty Center for the holiday season. I also go to the Liberty Center website and make a reservation for the day and time we would like to visit with him. 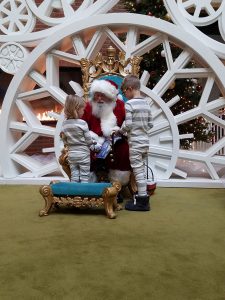 This year was probably my favorite year so far. Santa greeted them by saying, “I have been waiting for you two to come see me this year!” which immediately had both kids smiling from ear to ear. He then commented on my kids pajamas and slippers, which helped ease my 7-year-old’s embarrassment as he believes that he is “too old and too cool” for jammies in public. Santa put them both on his lap and asked them what they wanted for Christmas. My daughter shared that her one Barbie doll needs a Barbie house and my son shared that he likes technology, but is not sure what he wants yet. Without skipping a beat, Santa told him when he figures it out; he can write him his wish list and mail it. After talking about their Christmas wishes, Santa mentioned that they both grew taller and stronger in the last year. He even has me believing he remembers them from last year!

Before giving their final hugs, Santa showed them his book and pointed out his favorite reindeer, showed them the two different kinds of bells that he has, sang “Jingle Bells” with them, and then gave them each a candy cane. Since there was not a long line behind us, he spent some quality time with my kids and created memories they will never forget. Thank you Santa, and thank you Liberty Center!

To see when Santa is seeing kids or to make a reservation, check out the Liberty Center website: https://www.liberty-center.com/events/detail/evr/12/santa-photos-29

You are able to take your own pictures, but they also offer photo packages!