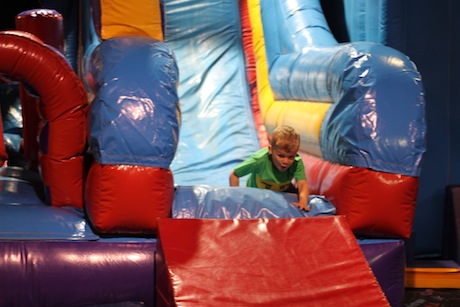 Earlier this year my son attended a birthday party at Pump It Up for a friend and he knew immediately that he had to have his fifth birthday there! I thought that he made planning his party easy for me, but really Pump It Up made it easy. When I was booking his party I read on the website that their “staff takes care of everything…” and they were not kidding. I booked the party and two days before I received a call to finalize how much pizza, drinks, ice cream, and kids would be attending. Our party hosts took care of EVERYTHING!

When we arrived they reviewed a few safety rules before unleashing the kids (…and adults!) into the first of our three private party rooms. The first room had a GIANT inflatable slide, a trampoline with bungee harness, inflatable basketball hops, Cozy Coupe cars, tunnels, and an inflatable obstacle course that both kids and adults were racing through. 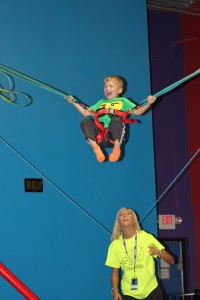 When the whistle blew, the party host lined up all of the kids and moved us to our second private party room. This room had inflatable baseball, a bounce house, air hockey, a rock wall, inflatable slide with obstacle course, balls, hula hoops, an interactive piano/soccer game/etc., on the floor, and an inflatable that you had to run, jump and see how high you could reach. At one point during the party there were more adults then kids testing how high they could make it up the inflatable wall. Everyone from the youngest, my 2-year-old, to the oldest adult had a great time! 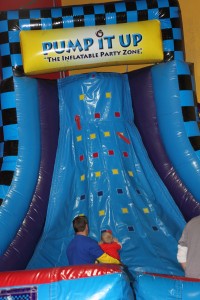 When the whistle blew again, we moved to the third private party room. The hosts set up all of the gifts, food, and drinks. Once all of the kids were seated they set up the birthday boy in a special inflatable birthday chair! We sang him happy birthday and while we watched a slide show of pictures they took of our party on the tv, they handed out all of the food which was also included in the price of our party. Once the majority of the kids were done eating, the party hosts coordinated the gift opening and recording of what he received and from who. When he was done opening gifts, the hosts handed out the party favors which were included in the price of the party we choose. They also took care of the clean up! 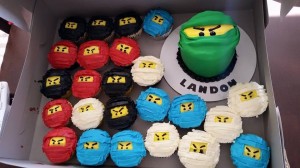 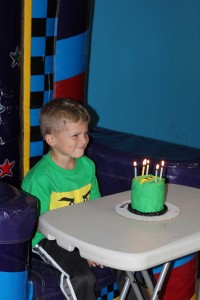 My son enjoyed his party at Pump It Up! I enjoyed it too! All I had to do was hand out the invites to the people my son requested to invite, order his custom LEGO Ninjago cake and cupcakes (From the fabulous Cassidy’s Cakery! She makes all of our custom cakes!), provide any extra decorations I wanted, and show up the day of the party! The coordinator I spoke to two days before was correct when he stated, “Parties at Pump It Up are STRESS FREE!”

Pump It Up of West Chester, OH

You can find Cassidy’s Cakery on Facebook or email Cassidy at cwodke@gmail.com

Mom Reporter Tina Pratt is the mom of two littles.  She is a former PreK- 5 special education teacher that now works as a behavior coach.  She enjoys being a tourist in her own town and finding ways to embed lessons into everyday fun!