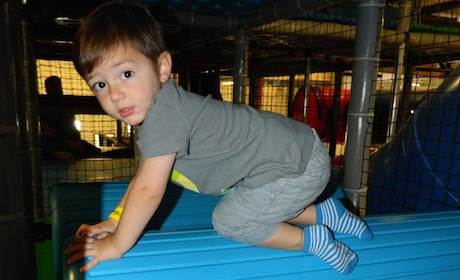 Burrow through tunnels,
Swing on vines, climb up mountains,
A true “jungle” gym!

Walking into Pogo Play (10870 Kenwood Road, Blue Ash), you are greeted by an absolutely mammoth indoor playground. There is so much to explore within the 7,600-square-foot GIANT playground; you could stay in there for hours! It has a ball maze, ropes course, scenic bubbles that overlook all of Pogo Play, a long winding tunnel, seven different slides, and many other fun obstacles for kids to enjoy. It would be easy to imagine this playground as a literal “jungle” gym, but I also heard children pretending it was a bustling city with a bakery and school, and other children pretending it was a spaceship! We usually make a route and do it again and again. Today we climbed up the stairs, walked past the balls in the maze and then went down the slides – again and again.

Pogo Play is not just a giant indoor playground though. There are so many opportunities for children to find independence, build things, gain strength and indulge in creative play. Pogo Play is designed so a child can go from zone to zone and play as they please. There are comfortable chairs for parents to sit back and relax while the kids play freely. I have found that since my two boys are both under 4, I typically play with them. I look forward to…and simultaneously dread… when my boys are old enough to go off on their own at Pogo Play.

Now for the rest of the zones at Pogo Play… 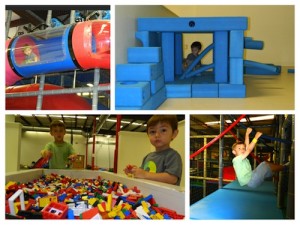 The dramatic play zone offers lots of opportunities for creative play! Children can use their imaginations to play farm, operate a grocery store, help pets at the veterinarian’s office and more.

If your child is into building things, there are three opportunities for creation. There is a building zone that has blocks and wooden vehicles, a zone stocked full with Lego’s and there is a zone called the “Imagination Station.” This zone yields over 100 giant blue pieces that your kids (or you) can use to build whatever their hearts desire.

And if you have little ones 3 and younger, the Toddler Room is the place to be! It features colorful, soft climbers for toddlers, a book area, baby dolls, balls, shakers and everything to keep a youngster content.

If your kids have any energy left, they could practice their free throw at the basketball court, scoot around the building on a plasma car or play games on the interactive floor. My kids always play hard and left Pogo Play ready for a good nap!

After playing their hearts out, my kids are ready for a snack. Pogo Play has a reasonably priced cafe that has some yummy pizza and cookies (healthier options like salads and smoothies are also available, though we opted for treats on our visit since it was my son’s birthday).

Overall, Pogo Play is a GREAT indoor play place. I would recommend getting there early. We arrived near opening time and had the whole place to ourselves for about 30 minutes! Another bit of advice would be to check Pogo Play’s schedule. Along with ALL of their fun zones, Pogo Play also has 6 inflatables that get blown up several times a week and for events. My boys had a blast at Pogo Play, and I bet your kids would have fun there, too!

Amanda Ciani is a Mom Reporter, sharing her experiences on what’s happening this summer!  Amanda lives in Northern Kentucky with her husband and their two terrific toddler sons.  She graduated from NKU with degrees in Sociology and Philosophy.  She enjoys writing haiku parenting poems for her blog (www.haikuciani.weebly.com) and Twitter account (@haikuciani).