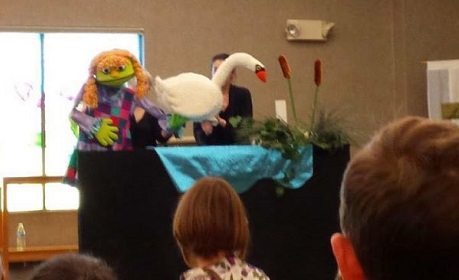 I love exposing my kids to new experiences. When the opportunity came up to attend a Peanut Butter and Jam Session, I was all over it! I was excited to take my kids to a concert where there would be orchestra music and puppets. 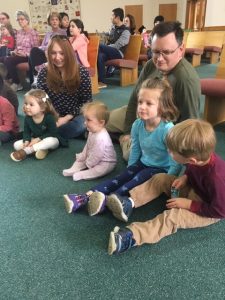 From the moment we walked in, everything and everyone was welcoming. The greeters welcomed us and the storyteller invited the kids to sit on the floor; even the baby sat on the floor for the whole performance!

The storyteller opened up by thanking sponsoring organizations and had the kids clap. Next, she read “Click, Clack, Sheep,” with sound effects to get the kids in the mood. She was successful!

Not only did my kids get to learn about music, but during the performance they got to experience puppets from Madcap Puppets, too. After reading the book, the puppets popped out from behind the stage and the room lit up as all the kids’ curiosity was sparked. As part of the script, puppets were not supposed to come out; they continued on anyway. The storyteller kept telling them to go back but they wouldn’t. They then realized they had a mess on their 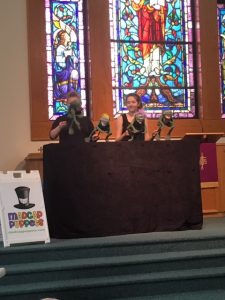 hands because the story they were going to tell was all out of order. They had picture cards of “The Ugly Duckling,” that had fallen on the floor, and decided they would work with the trio and get the cards back in order to tell the story. This was a great sequencing activity!

Next up, the storyteller introduced each musician in the trio, and we applauded for them. They also told us facts about there instrument. We learned a cello has strings, a clarinet has a reed and piano has keys. Even after the concert my kids were pretending to play instruments! I just love that they got to learn about classical music in such a fun and interactive way.

After the puppets decided to fix the cards and the musicians talked about their instruments, the show began. The trio played and the story of “The Ugly Duckling,” was told. Since the audience had 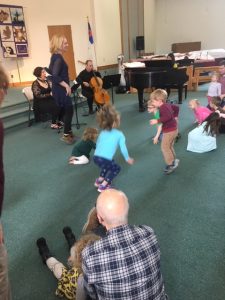 just seen the picture cards, they were familiar with the story. The trio played and the puppeteers passionately told the story!

The music was lovely and the puppets were so engaging. There were eggs, ducks, frogs, a little girl, and of course, the swan. The puppets moved and danced, then moved to the rhythm of the music as the story of an outcast duckling who turned into a beautiful swan was told. My little three year old retold me the story at bedtime, so I know that they understood the story line from the performance!

Although my kids sat and watched (yay) this was by no means a sedentary event. The kids got up and jumped like frogs. They played their instruments and participated in other various ways. After the show, kids were invited to look at the puppets and instruments more closely. This is truly an occasion where all ages are welcome and can enjoy the arts!

$6 for an individual ticket;  $20 for a Flex-book of four tickets (buy 3, get an additional ticket for $2); free for ages two and younger.