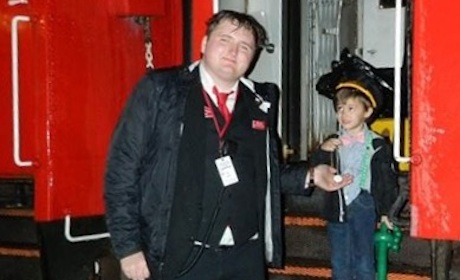 Click clack along the tracks. Hop aboard the North Pole Express and be transported to Santa’s Village on the LM&M railroad!

My son Dominic and I recently enjoyed a Mommy-Son date train ride together. He got all decked out with a button down shirt, bow tie and even holiday suspenders.

We boarded the train, and headed toward the caboose. We snuggled close together in seats he chose, and the train filled with happy folks. Some were decked out in their finest holiday pajamas, others displayed their cheer by smiling ear to ear. It was downright frigid outside, but the train ended up feeling nothing short of warm inside!

We heard two long train whistles “chooooo chooooooo”, meaning it was time to depart. The trains cars swayed back and forth, as kids started singing holiday jingles. Dominic clung to his ticket, since we recently saw the Polar Express movie. The conductor stamped our pass, as an announcement came over the speakers- we were now free to get snacks. We purchased some cotton candy to share, and headed back to our seat to look for reindeer or Santa’s sleigh. We saw a couple of mysterious lights (car brake lights, but don’t tell Dominic, he firmly believes it was Rudolph’s nose), and then we arrived to our destination, the North Pole! 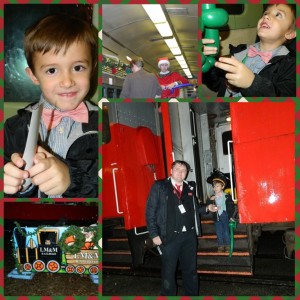 We carefully got off the train with the help of the conductor and got right to exploring! Decorative lights lead us on a path to view several cute inflatables but more importantly to a tent that served up hot cocoa and treats (included in ticket price, no additional charge). The hot chocolate was a huge success, it definitely hit the spot and warmed us up a bit! Dominic had his meeting with Santa and Mrs. Claus (yes he’s been good, yes he still wants a Lego Scooby Doo toy). At the end of the visit, Santa gifted Dominic a real bell from his real sleigh (you can’t tell Dominic otherwise. He REALLY believes we went to the North Pole on the Polar Express). There is also another tent where kids can write letters to Santa, but we were a little too chilly at that point and headed back to the train.

Once we heard the two long choo choo’s, it was time to chug back to the station. The train swayed back and forth as the carols began once more. Then we encountered a friendly elf and reindeer making balloon animals! Dominic asked for a green sword, and was the happiest kid on Earth!

Then we were back where we started and our trip was complete! On our way out, Dominic asked the conductor “excuse me mister conductor, can we get a picture?” And even though it was late, rainy and cold, the conductor took the time to find a nice spot with good light and let my son wear his hat and hold his pocket watch. Dominic was enamored! I do believe this mommy-son date tops most we’ve had before! It will be a treasured memory, and I hope we are able to continue this trip in years to come to make it a true holiday tradition.

If you have a chance to take your family on the North Pole Express experience with the LM&M Railroad in Lebanon, I would highly recommend it! This is the stuff that holiday memories and traditions are made of! Any trip will fill your spirit with warmth and jolly; but if you want to feel like you have been transported to the North Pole via the Polar Express, I absolutely give the 7 p.m. night trip two BIG thumbs up!