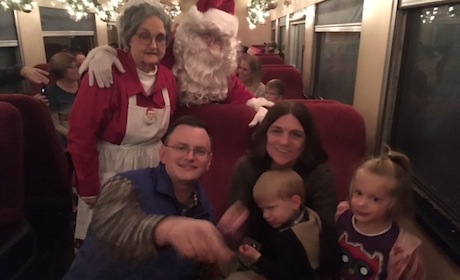 Downtown Lebanon with its historic homes and buildings is the perfect backdrop for the 1930s LM&M train station. The town was lit up and decorated for Christmas, as was the train station with lots of wreaths, garlands, and lights. The wooden platforms and ticket office made it feel as if you were going back in time. My kids were blown away with the sight of the train and just stared. Walking through the train station would have been an event in and of itself for my young toddlers as there was much to take in. 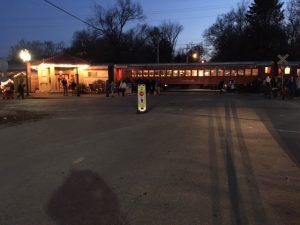 This past Sunday we took an evening ride aboard the North Pole Express in Lebanon, Ohio on the LM&M train. We had the privilege of riding “first class” in the Cocoa Class, which featured a heated car, restroom, and free hot chocolate with refills! Several options for seating are available on the website. The car had a vintage feel to it with its red velvet seats and metal reclining levers. The car was very clean but had an old feel about it that added to the experience of riding on the train! The car was decorated for Christmas with green garlands and presents on the hooks and shelving above the seats. Holiday music was playing throughout and my children and I had fun dancing and singing along — even though I got some looks! The atmosphere made the experience so much more magical than if it had been an ordinary train! 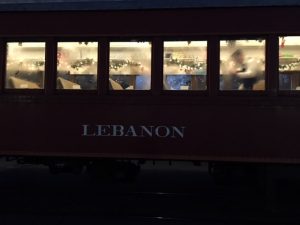 The festive train car was just the beginning. There were surprises throughout. Once we departed we were introduced to the conductor who let the kids try on their hat. Once we were settled in, an announcement came over the intercom telling everyone to look out the window only to be greeted by Santa and Mrs. Claus. They were enthusiastically waving outside of the train in front of their own train car. They climbed aboard to greet all of the children! My small kids of 3 and 1 seemed to like Santa but from a distance. They both clammed up when he came by and it was a struggle to get a picture but it really was a fantastic opportunity to get up close and personal with Santa and Mrs. Claus. They will come around! Santa warmly interacted with each family and had a little bell for each child. I have been hearing them ring all day around my house. 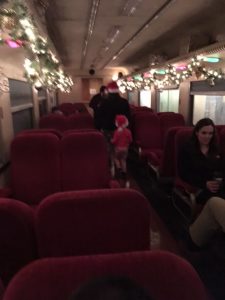 In addition to Santa Claus it was fun to look out the window on the twelve-mile round trip ride from Lebanon to Mason. We also could get up and walk to the attached car and open the creaky door that attached the two cars. It was really neat to see how the cars were connected and look out the window. All of this added to the experience of riding on a historic train.

Santa was not the only entertainment for the night! The conductor read The Night Before Christmas to all of the children and all of the adults helped close out the story with, “and to all a good night!” The elf Mistletoe and her 307-year-old sister made balloon art for the children with options from snowmen to reindeer. My child wanted a crown but we finally settled on the snowman. The beautiful balloon sculptures quickly transformed into swords as the balloons became untwisted and the children a little restless on the last leg of the trip, but everyone was having fun! Another highlight was singing Rudolph the Red Nosed Reindeer. It was a fun packed night and my kids talked about it all day today! 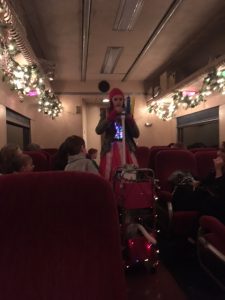 LM&M does not only do Christmas rides, they also feature themed train rides throughout the year including things like Curious George, Thomas the Train, Kindervelt Charters, and beer and wine tastings. There are also general train rides. If you’re looking for something to do this Christmas season be sure to check out the North Pole Express but keep in mind that the train has events going on all year. Be sure to check out the website for more details about pricing and schedules. http://www.lebanonrr.com/