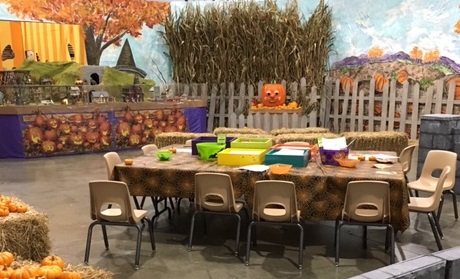 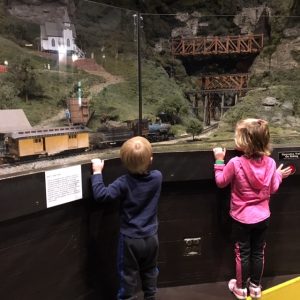 Last Friday, my family went to EnterTRAINment Junction to partake in the fall-themed Jack-O-Lantern Junction event. We got to enjoy the regular attractions as well as the seasonal ones. Upon entering, we felt like we were in a train station because of the paved walk way, street lights and trees. The ticket counter also made it seem like we were about to board a train. Right past the ticket counter was the Train Journey, which featured life-like train models from different time periods, and the replicas were very life like and detailed as well. The displays are very interactive with signs and things to look for in the display. There were also buttons to push, and many of the displays had a step up and portable stools for kids so the can see what was going on. My family really enjoyed looking at the Coney Island display, which had such features such as a merry-go-round and a ferris wheel. Some of the other displays told the story of the railroad from the Civil War and the Industrial Age. The houses even had people in them and the lights dimmed for night time; my kids were very intrigued! 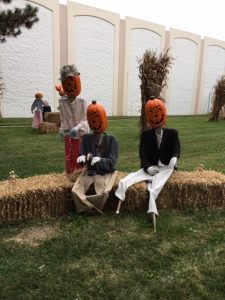 In the middle of the Train Journey is the Imagination Junction, which can keep my kids entertained all day! It features an indoor playground with tubes and slides, train tables and interactive train displays. We had to tell them we would come back so that we had enough time to enjoy all of the attractions. It took some convincing, but once we got moving they were on board. We continued through the Train Journey as well the Railroad Museum and then through the Electric Locomotive which runs during the summer and October. My whole family straddled one of the benches in the two-car locomotive and took a ride outside. The route was lined with scarecrows and other Halloween-themed decorations. This was really fun! It was a little chilly, so make sure to dress warm. 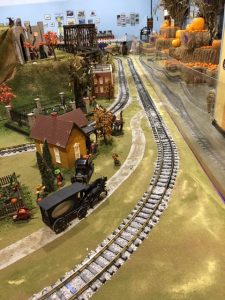 After that, we followed footprints to Trick-or-Treat Manor. There were different rooms that were decorated with Halloween themes, but it was not scary, and there were skeletons eating meals and the witch's kitchen with books and recipes for witchy brews. It was well lit and the displays were fun rather than scary. Throughout, there were stations for kids to collect a piece of candy in their bags that they got from the ticket booth. Once we exited Trick-or-Treat Manor, there was an indoor pumpkin patch. My kids each selected a pumpkin and then decorated it with stickers to make a silly face. In the pumpkin patch, there was a craft table with coloring pages and a Halloween-themed train display. The kids had fun looking at that and seeing the replica of a small town in the fall getting ready for Halloween. We plopped on the hay bales and listened to the giant talking pumpkin.

Before leaving, we went through the A-Maze-N Funhouse. My family really enjoyed the Mirror Maze and the Clown College where we could take pictures at funny angles to make things seem larger or smaller than they really were. We had to be careful not to bump into the wall! There was also Curtain Chaos and Outer Limits. The A--Maze-N Funhouse was a nice surprise and challenging even for my husband and me.
EnterTRAINment Junction is a fantastic way to spend an afternoon and a place you can return to over and over again. The BEST VALUE ticket gives individuals access to all of the park's attractions for $15.95 online and a season pass for a family of four is $185. EnterTRAINment Junction is open 10 a.m. - 6 p.m. Monday through Saturday; and 12 p.m. - 6 p.m. on Sunday; closed on Thanksgiving, Christmas, Easter, and select dates in January.

Jack-O-Lantern Junction runs through October 31, and Christmas at the Junction runs from November 17 - January 1. The venue also hosts birthday parties, corporate events, school groups and tour buses as a premier attraction in Butler County. For more information on tickets and more, visit entertrainmentjunction.com.

Susie lives in the northern suburbs of Cincinnati with her husband and three kids. She has a 5-year-old, 3-year-old and a 14 month baby! Together, they like to explore new things in Cincinnati as well as favorite places like Summit Park and Sharon Woods. Susie is a former high school teacher and now a stay-at-home mom. She also enjoys running, being outside, spending time with family and friends, road tripping, participating in her church's activities and drinking coffee. 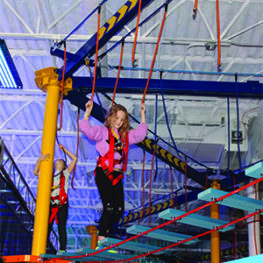