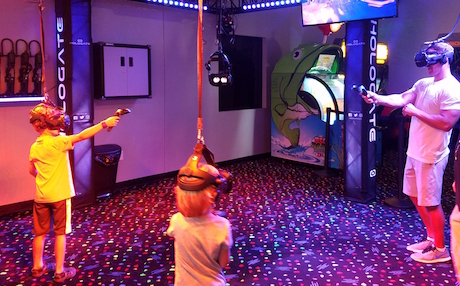 As the temperatures keep rising this summer, head on over to Lazer Kraze in Mason and heat up your gaming skills. Lazer Kraze has something for everyone, they have a trampoline park, laser tag, arcade games, and a new virtual reality game called Hologate. They also have a wallet-friendly concession stand. 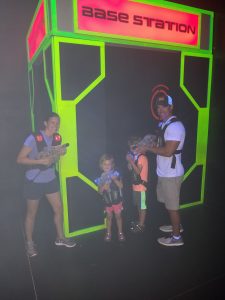 We recently headed over and spent almost three hours enjoying the facility! My 4-and-a-half-year-old daughter engaged in her very first game of laser tag. My kids wanted to be on “Team Dad” and handed me off to a father and son team that luckily took me in so we could play 3v3. Little did my kids know, but this was also my first game of laser tag and they found it fun to gang up on me! My son cornered me multiple times and tagged me and then took off giggling. I would try to find him, but he hid better than I could. My husband helped my daughter hunt me down and she giggled as she blasted my vest too! One of their favorite parts was checking their stats at the end and seeing how many times they got me! 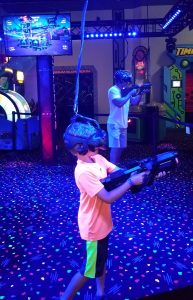 Next up, we headed over to play Hologate. I was a bit concerned that the virtual reality game would be a bit too scary for my youngest, but to my surprise they had a game just right for my kids! The game is called Cold Clash which involved us throwing snowballs at penguins to collect coins, ducking from the Yeti throwing snowballs, and throwing snowballs at each other. My son exclaimed, “WOAH!” as soon as the virtual reality goggles were placed on his head…which was also my reaction! My daughter waved her arms around her face as she explored the virtual reality terrain. It was like being integrated into another reality, I remember thinking as I looked down and couldn’t see my feet. Only the virtual gaming field. It was fun to compete and play as a family. Concerned that Cold Clash might be too “young” for your kids? No problem! Hologate also has a game called Simuri which my husband and oldest child played. They worked together with the other father and son team to overcome robot drones and a dragon. It was amusing to watch them duck, turn, and trash talk! My son trashed talked far more than I knew he was capable of.

We played the arcade games while we let other families play Hologate. Turns out my daughter is quite the motorcycle rider and my son is great at the Jurassic Park game. After another round of laser tag, we stopped at the concession stand to purchase drinks for all of us and to collect our laser tag game stats.

Both of my kids crawled into bed, asked if we could go back to Lazer Kraze when they woke up, and quickly fell asleep…likely dreaming and giggling about throwing snowballs at penguins.

Load your kids up in your car and head over to Lazer Kraze for fun of all kinds … they will also be getting a new Hologate game called Zombyte coming soon. Check their website for hours and pricing!

Hologate is available at the Mason location, but Lazer Kraze has multiple locations with plenty of fun for the whole family, find them all at lazerkraze.com.

VOTE IN THE BEST OF PARENTING! 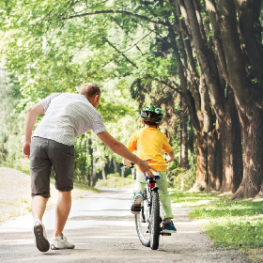 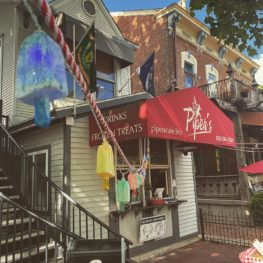