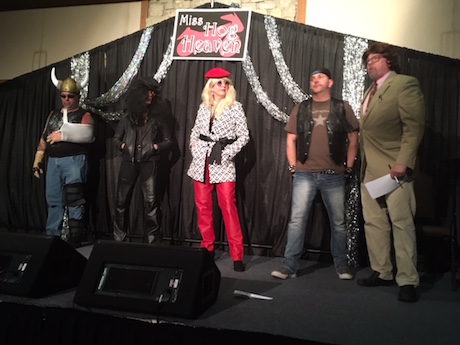 Looking for a unique date night experience? Then look no further than the Great Parks Mystery Dinners. This past weekend my husband and I went to Hog Heaven at the Mill Race Banquet Center at the Winton Woods Golf Course. It is a very nice venue and many weddings and other events are held here. The doors opened at 6:30 p.m., and once we were seated our salad was served. Some people were with groups but nonetheless we quickly bonded with our tablemates, which is an important thing to do as you all work together to unravel the mystery. 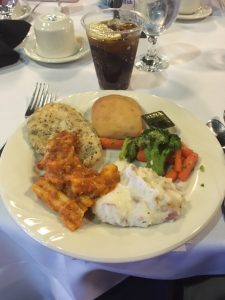 Around seven tables were invited to go up to the buffet. The main course was prime rib and chicken along with rolls, mashed potatoes, vegetables, and pasta. The food was tasty and satisfying. Water, tea, coffee, and soda were complimentary and alcohol was available for purchase at the bar. After dinner the characters started coming out and engaging the crowd. The program provided a plot summary and a description of each character. That was very useful until we became acquainted with the storyline.

In a nutshell, Hog Heaven was about figuring out who set an explosive on the bike that Spike was riding and the motive behind it.  This took place during the “Miss Hog Heaven” contest. Would the winner be the blond and beautiful Thelma from the Reading Road Kill Ramblers or the rough and tumble Louise? Did Thelma have a motive as Spike was her boyfriend but she had a thing for Mongo the shop owner? Maybe Mongo had something against Spike? Did Thelma have some ulterior motive? What about the accountant Phillip McCracken? Hmm? Who dun it? 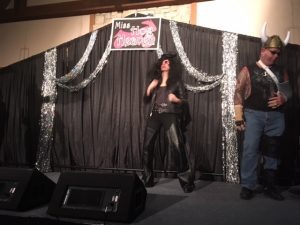 What sets this experience apart from other performances is that the audience was engaged throughout the show. For example, my side of the room was cheering for Louise in the beauty contest and so I held a sign up and the opposing sides cheered and booed. Also, some audience members were randomly selected to take part in the action. Towards the end, the tables brainstormed together to solve the mystery. Then everyone could fill out a comment card individually and state who they think the guilty person was and the most accurate description won a prize. The outcome of the mystery was clearly defined by the actors prior to the show ending.

This was truly a fun and different kind of date night that made everyone laugh as well be engaged! If looking for something to do for your next date night, three Mystery Dinners remain this season. Be sure to check out the following link for details about times, dates, and prices!