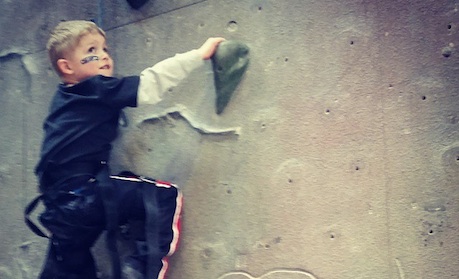 My husband and I recently had a day date and went rock climbing at Rock Quest. My husband took a video of me climbing and showed it to our son. Of course, as soon as he saw the video he wanted to go! We decided that for our next mommy/son date we would go climbing.

As the day of our date approached, I called Rock Quest to make sure that he was old enough to climb. They shared I would need to make a reservation and he could climb with one of the employees. He could also try bouldering. They also shared that I could fill out the waiver online to save time once we got there.

I took my son in a bit before our reserved climb time. I wanted him to see other people climbing, talk to him about climbing safety (never walk under a climber, let the employee know when he was going to come down, etc.) and about fears. I wanted him to understand that it was ok to feel nervous as he climbed higher up the wall. 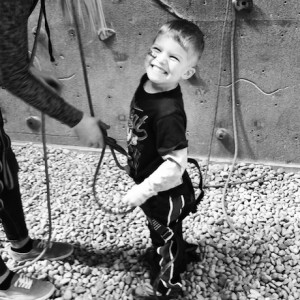 When it was our turn, the employees helped him into his climbing shoes and helped him put on his harness. They talked through each step so he would have an understanding of what he was wearing and why he needed it. The employee also provided him directions on what he needed to do when he was ready to come down off of the wall.

It was time to climb! His eyes widened when we entered the climbing area, he didn’t realize how tall the walls were while we were sitting outside. He looked up and found the spot he wanted to climb to. As he started to climb he realized he needed to use both his arms and his legs. (Great gross motor activity!) He shared that it was harder then he thought it would be. He kept on going though. He kept climbing until he reached his goal! HE DID IT!

The look on his face was priceless! He climbed the wall and came down on his own. He was smiling from ear to ear. He was proud of himself! He climbed a few more times getting higher and higher each time. It was an amazing experience for him and boosted his confidence!

Mom Reporter Tina Pratt is the mom of two littles.  She is a former PreK- 5 special education teacher that now works as a behavior coach.  She enjoys being a tourist in her own town and finding ways to embed lessons into everyday fun!