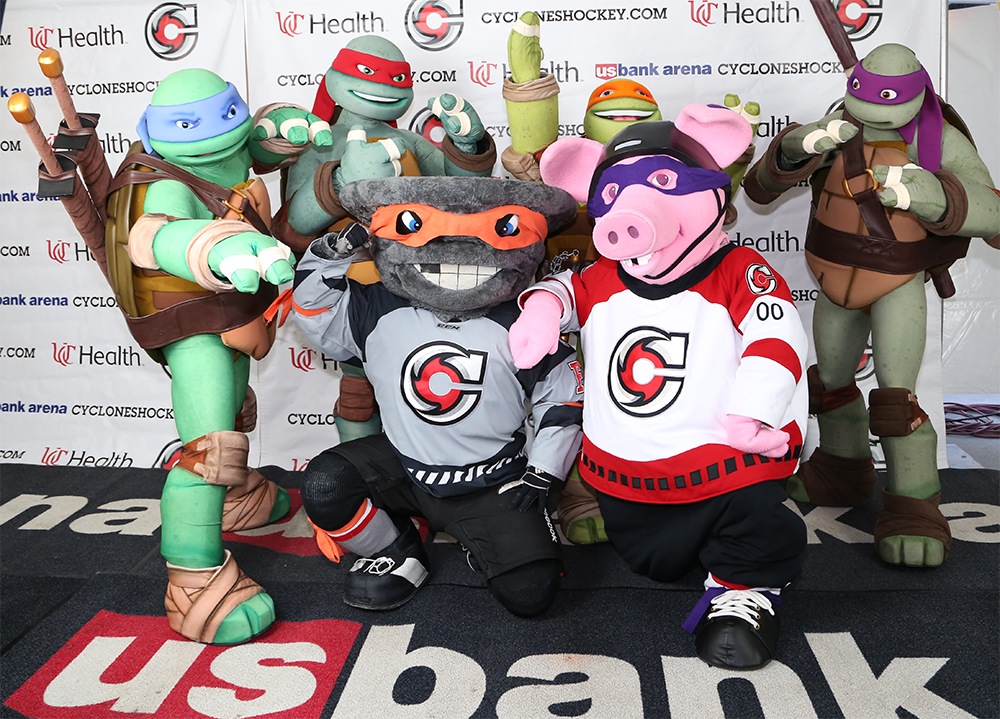 A trip to U.S. Bank Arena for a Cincinnati Cyclones game is more than just a game. It is an event! My children were smiling as soon as we walked in … probably a little from staying up past their bedtime, but mainly because of all of the concession stands including the special $1 Donatos pizza slices, the special guests for the night, the Teenage Mutant Ninja Turtles, and of course watching their first Cincinnati Cyclones game! 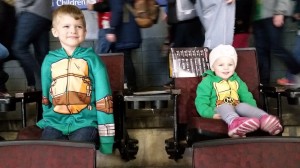 Their smiles grew from ear to ear as soon as we entered the arena and took our seats. Hockey fans young and old were decked out in Cyclones jerseys and their favorite Ninja Turtle gear. A record breaking 16, 529 fans were in attendance ready for the game to begin. We took our seats and enjoyed our snacks just in time to watch the players warm up. I took my kids down to the glass to get a closer look. They were in awe of how quick the players could race around on their skates. 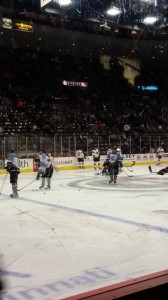 They were bummed when warm up was over … until they saw the ZAMBONI! My son wants to buy one and my daughter wants to ride one. She kept asking me over and over if I had money for the BONI rides! I am biased, but it was crazy adorable.

THEN the lights went out and their eyes widened. I was expecting the starting line up to be announced, but instead we were entertained with an amazing Cyclones and TMNT video on the Jumbotron. My son didn’t move for the entire show and honestly neither did my husband! Then there was fire. Lots of fire! As the starting line-up was announced flames shot out of the arch the players came through. Both of my kids were speechless. 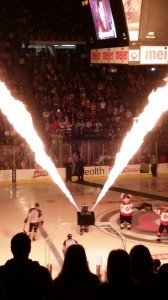 Game time! An adorable kiddo came out to drop the puck. My son now wants to be next in line to drop the puck. He was practicing in our basement and requested I “sign him up” for the next puck drop. As my kids heard the arena full of people cheering they realized that they could be as LOUD as they wanted … which is any kids’ dream! They began cheering, yelling and giggling uncontrollably. They were dancing and shaking their booties to the music. We all had a blast!

My family enjoyed running into people we know, watching the Cyclones as well as the sled hockey players, the Ninja Turtles and the mascots! We just found our new favorite family date night. When it was time for us to leave, they both wanted to stay. They were ready for more! They haven’t stopped talking about our amazing trip to the Cincinnati Cyclones game and I have already checked the schedule to start planning our next trip to U.S. Bank Arena! Go Cyclones!!! 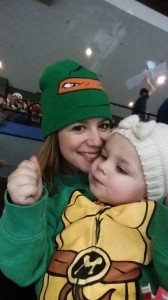 The Cincinnati Cyclones have a few home games left this season and they include some fun activities!