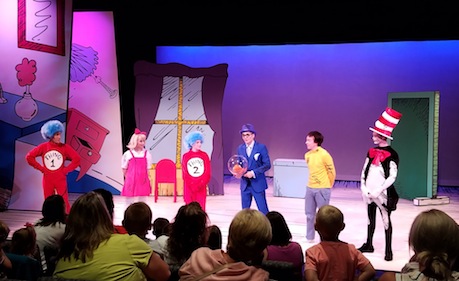 Get your summer started off right with a trip to The Children’s Theatre of Cincinnati! Currently, at the Showtime Stage at Red Bank, families can purchase tickets to a childhood favorite, Dr. Seuss’s The Cat in the Hat. 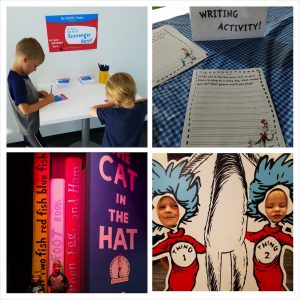 The doors open up 45 minutes before show time and there are many activities for kids to do. There is a table to color The Cat in the Hat characters, a writing station, and a scavenger hunt. During the scavenger hunt my kids and I learned many things about Dr. Seuss, including who he based his character The Grinch on. There is also a concession stand, but food is not allowed in the theater, so we made sure to stop by after the show.

The theater is small and intimate and every seat is a great seat. We took ours and waited patiently for the show to start. As soon as the show started, my children were in awe. The loved meeting Fish and the special bubble surprise he had in store for them. They giggled during the interactive parts and happily responded and played along. My daughters eyes darted from character to character and I watched her track them and the props off of the stage. From beginning to end their attention was held, as was mine! 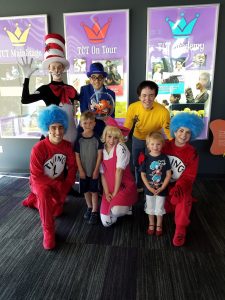 After the show, which was about 40 minutes long and the perfect length of time for kids, the cast took the stage to answer questions from the audience. They answered everything from how props were made to how long they have been rehearsing. Upon exiting the theater, there was a meet and greet with the cast. I was able to snap a picture of my Thing 1 and Thing 2 with them. This was our first Children’s Theatre of Cincinnati experience and it was fantastic. My kids and I highly recommend a trip to see Dr. Seuss’s The Cat in the Hat! The show will be running from June 2 to July 9, 2017, and there is a special sensory friendly showing on July 7 at 7 p.m.

But don’t take my word for it, hear from the experts themselves — the kids! 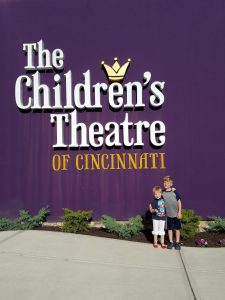 “My favorite part is when we were able to get pictures with the actors after the show and when we pretended to catch the ball that The Cat in the Hat was tossing to us.” – Landon

“My favorite part is when Thing 1 and Thing 2 were flying kites in the house.” – Evelyn