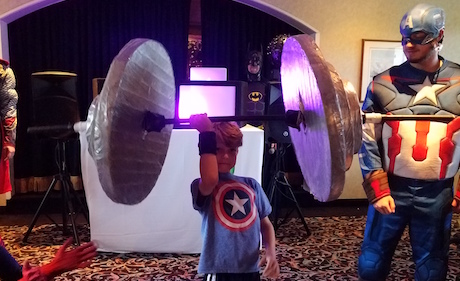 Almost every kid at one point or another has pretended to be a princess, a pirate, or one of the many amazing superheroes! My daughter has been the Hulk and just about every princess. There is something so fun about dressing up and engaging in pretend play! BB Riverboats has taken pretend play to the next level! They offer Princess Cruises, Pirate Cruises, and Superhero Cruises on the Ohio River! It is a fun opportunity (no matter your age) to dress up and experience the scenes on a riverboat. 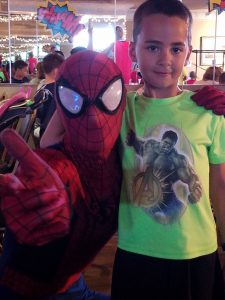 Five years ago, when I was still pregnant with my daughter, we took our son on the Pirate Cruise. He dressed like a pirate, swabbed the deck, walked the plank, and participated in other pirate themed activities. 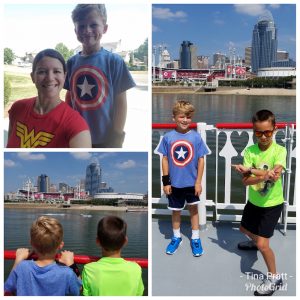 This year, I put on a Wonder Woman shirt, loaded up Captain America and his friend the Hulk and headed down to Newport for the Superhero Cruise. We “flew” onto the ship and took a long walk viewing all the decks. We eventually made our way to our table and ordered some drinks and food. Shortly after leaving the dock, the Superhero training began. Super heroes big and small lined up to warm up and practice their punching, kicking, and jumping skills. They also lifted HUGE weights … which my son decided he needed to do with one arm! 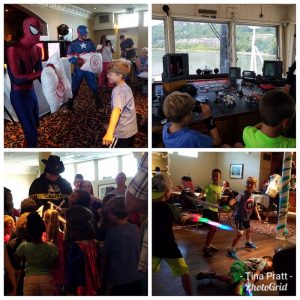 After all the superheroes received their training, they finally got their superhero mission! There was a villain on board the ship and they had to find him! The kids walked around the ship trying to locate the sneaky villain. Finally, they found him, and the cruise ended in an epic sword battle and dance party! Both boys had fun meeting the superheroes too … Captain America, Thor, and Spiderman were on board for the fun! My son’s favorite part was, “Going up all the way to the top of the ship to see the Captain and all of his tools!”

If you have a princess, pirate, or superhero, check out the BB Riverboat cruises and get an outfit ready to dress up too! Check their website for future cruises, times and cost: https://bbriverboats.com/