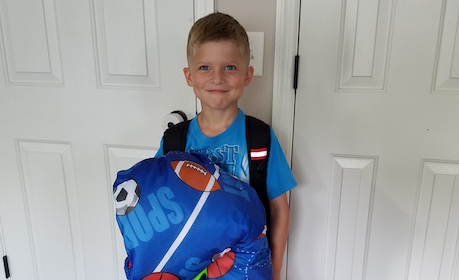 I kept my son’s baby book next to my bed as a reminder to fill out each and every milestone he accomplished. From his first smile, the first time he sat alone, his first steps, his first tooth, and more. I did my best to document each and every milestone. It was exhausting, and I’ll be honest, I fell behind a few times. I was secretly excited when he turned 5 and I finished filling it out. However, this summer I’m finding that I wish his baby book extended past the age of 5. This summer has been full of firsts for my baby boy and I feel like I can’t keep up!

He spent all of his kindergarten year talking about summer playdates and sleepovers. The first night he stayed at a friend’s house I was anxious and missing my baby. I was hoping he was doing fine. When it was time to pick him up, he couldn’t stop talking about all of the fun he had. In my eyes he grew up so much just in one night. Now he is going on sleepover number five and can pack his bag himself. 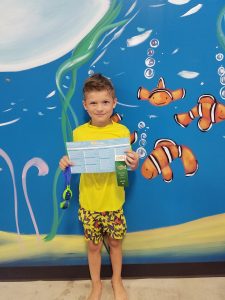 He loves sports! Since he was 3, he has been participating in soccer, swim, football, and gymnastics. This summer he hit two swim milestones and has jumped two levels at Goldfish Swim School and he was so proud of himself. Both times he immediately asked to call his dad to share the good news. He also participated in his first drop off gymnastics camp at Cincinnati Gymnastics Academy. What he is most proud of, though, is trying out for a soccer team with Cincinnati United and making a team!

We set up a Saturday morning to go “creeking” even though we weren’t sure what that meant. We met a couple other families that had boys of similar age to Landon. After only a few minutes we noticed a big change in Landon’s behavior. He wasn’t looking back for our approval to go dive into a creek, go off the path, and climb across rocks. He was just one of the boys, exploring and venturing a little farther then our comfort level, but we recognized that we needed to let him explore and figure things out on his own. We were very surprised at his courage, how he explored areas without the help of Mom and Dad, and his leadership of the other boys to cross points of the creek that had water over chest high. 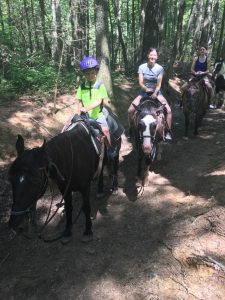 Mid-summer we took two vacations. The first one was to Gatlinburg where he slept in a bunk bed and on the top bunk for the first time. Then he realized he was old enough to ride a horse. He held on tight while he galloped through the Smokey Mountains on a horse by himself … with me following closely behind. Next, we went back to Michigan to see our family and have the kids spend time with their cousins. Their Abuelo was very excited to have the opportunity to take them fishing at my sister’s house which is on a lake. Landon caught his first fish with his Abeulo and developed a love for fishing right after that. They managed to catch 20-plus fish over the next couple of hours and Landon made sure his sister was able to experience the thrill of reeling in a fish too. Landon went from extremely scared to touch the fish to grabbing a fish out of a bucket to show us how proud he was to be a fisherman. 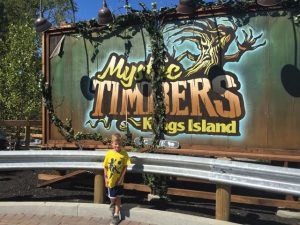 He also hit 48 inches tall this summer which created an entirely new experience for him at the Beach Waterpark and at Kings Island. He was able to go on the BIG kid water slides and enjoyed going down each and every one he was tall enough for. At Kings Island, he took off with his dad and hit Mystic Timbers, The Beast, and all of the other coasters I am too scared to go on. I stuck to the Lazy River and to the Woodstock Express with our 3-year-old. He looked proud to tell me all about the rides I have never been on.

In these few short months my baby has hit so many milestones. He has grown up so much in little ways. In ways that are not documented in baby books, but in my eyes should be. Maybe it is about time I search for an elementary school milestone book and document these firsts … before he loses his first tooth!