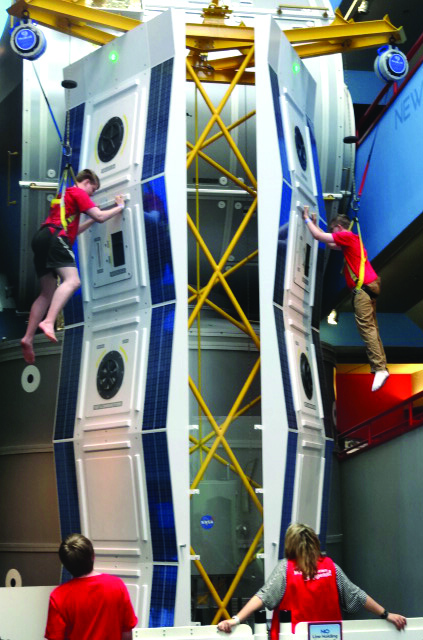 Ihovered beside a tower, suspended, experiencing the zero gravity astronauts endure. I was told to pull myself toward the tower, turn a wheel, lower myself, open a door, lower myself again, and complete my mission by grabbing a second wheel, turning and pushing it at the same time. I couldn’t and ended up back on the ground, mission incomplete. The kids couldn’t do it either.

Our astronaut adventure happened at the Carnegie Science Center in Pittsburgh, Pennsylvania. Nicknamed “Kidsburgh,” Pittsburgh delivers fun for families with attractions like the Pittsburgh Zoo & PPG Aquarium, the Duquesne Incline, and Kennywood Park, one of the nation’s first amusement parks. During our visit, we took in two of the city’s most famous and kid-friendly museums, and enjoyed sightseeing downtown.

Once we returned to earth at the Science Center, we explored more about space, by flipping switches and controls in a simulated space station cabin, seeing mild explosions in a show replicating rocket launches, and touching a real meteorite.

Throughout the Center, visitors can touch almost everything. In Roboworld, we controlled robots and tested our skills against them, competing with mechanical arms in basketball and air hockey, while Hollywood Robots, including HAL, R2D2, and C-3P0 looked on. I snapped my picture with my favorite, “The Robot” from “Lost in Space.”

In Seascape, we found “Dory” in an aquarium, peered through a periscope in a submarine model, and activated a wave simulator. Nearby, the kids took turns pointing out weather systems against a meteorologist’s green screen while reading from a teleprompter. Next they sat at a table, pushed a button, and experienced earthquake tremors.

Time passed so quickly that we didn’t get a chance to explore Highmark Sportsworks, a whole other building devoted to the physics, anatomy, biology, and chemistry of sports. However, on another day, we explored the Western Pennsylvania Sports Museum where the kids played bocce ball, tossed footballs and learned about Pittsburgh’s high school stars, who went on to greater fame as professional athletes and Olympic boxers, wrestlers, and swimmers.

The Sports Museum is an affiliate of the Smithsonian Institution. We took the elevator through its five floors and found endless hands-on activities. We turned a railroad’s steering mechanism, pushed buttons to bring the sounds of a 1950s kitchen to life, lifted flaps for answers, and examined 3D images of glass making factories through stereoscopes. While Cincinnati’s Freedom Center boasts a far more expansive exploration of slavery and the Underground Railroad, the Heinz exhibit is still impressive, as is the overview of the French and Indian War, but, of course, Heinz, the company, is known for its pickles and ketchup, and we loved learning Heinz history, seeing its kitschy ads, and measuring ourselves against a giant-sized bottle of ketchup.

In addition to Heinz, the museum celebrates Pittsburgh’s other innovations and innovators, along with celebrities, prompting our kids to pose with a lifelike figure of Mr. Rogers. The children’s area has train tables with boats, toy foods, a slide, and a colorful replica of the first Ferris Wheel built for the Chicago World’s Fair and designed by George Ferris, founder of Pittsburgh’s metal firm G.W.G. Ferris & Co.

After the History Center, we strolled around town. We saw the ToonSeum, one of only three museums in the country dedicated to cartoon art. The gallery is small, and probably not worth the $6 admission, but kids will enjoy the gift shop, the free comic books in the outdoor seating area and the nearby giant jazz statues.