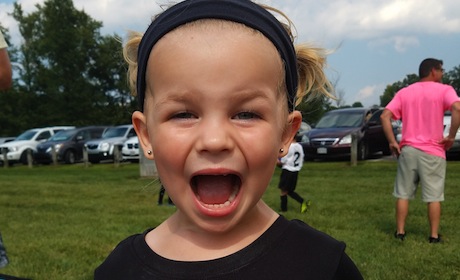 When I was pregnant with my oldest, I had a friend tell me to buy a journal to record the funny things that he would eventually say. It was fantastic advice! Ordinary days have turned into extraordinary days by the phrases I have recorded of my kids. By recording them, I have created a permanent memory for me as well as them.

When both of my kids were little, they misused words, mispronounced, or just made up words to express their wants, needs, and feelings. My son used to call the Buckeyes the “Butt-guys” and as a Michigan family, we would always chuckle. He also called cookies “tooties” which always put a smile on my face. One day after my daughter learned how to push his buttons, he told me he was just going to “granol” her. I imagined him throwing granola on her, but then realized it was the word he substituted for ignore. A few years later and we still refer to ignoring as “granoling.” The once-mispronounced bellyache will always be referred to as “Belly Steak” until the day they correct me. With all of the hurricanes, my daughter has been praying each night, “for all of the people hit by tomatoes.” Although I have corrected her on this one, it still comes out tomatoes.

Then there are the simple things that they say that can open your eyes to the beauty of the world around you or make you question something you never thought about. One time when my son was 3, he told me that the “leaves falling looked like glitter.” Now every fall when the wind blows hard and releases leaves from their trees, I view them as leaf glitter. Every time I read, “Chicka Chicka Boom Boom,” I hear a tiny voice in my head asking, “Why did they go up the tree to begin with?” Which is a valid question.

Once they got a bit older, their phrases began to shed light on how they process the world around them, what they have learned, and their blossoming sense of humor. On my birthday a couple years ago, I walked up to my son and my husband buying me a birthday cake. My son immediately blocked the cake and told me, “Nothing to see here. Just buying a pizza.” He understood the excitement of birthday surprises enough to tell a small fib in order to keep the cake a surprise. Both of my kids have also told me as we enter Target to, “Look with my eyes and not with my hands!” At least I know they are listening! I recently asked my daughter to get her little green pumpkin. She corrected me, told me it was a gourd, and then proceeded to say, “OH, MY GOURD!” with a huge smile on her face, as she knew she was being funny. I was surprised she knew the term gourd, so I thanked her for correcting me. Since then, you can catch me saying, “Oh, my gourd!”

Then there are the phrases that turn my face red. The ones you wish your child did not say in public. Once while leaving a store, one of my kids told me, “don’t forget to tie me up like you always do.” I was mortified and confused by what they were trying to communicate…upon questioning, I realized my kiddo was talking about TIGHTENING him up in his car seat. Then there are the MULTIPLE times we have walked into a public restroom and one of my kids yells, “It smells ferocious in here!” Most recently, I was shopping at a store with my son and as we were leaving we set off the security alarm. Without skipping a beat, my son loudly says, “Make a run for it!” and then begins laughing hysterically. Everyone stopped and looked at us and I immediately flushed. We took the item that we already PAID for back to the register to get the security tag removed before leaving the store again. At the time I was mortified, but now looking back I can chuckle as his quick wittiness. One for the journal for sure!

I highly recommend getting a journal and documenting the darn things your children say. You will not regret it and someday when they are older, they will flip through it and chuckle at the hilarious things they said while growing up!