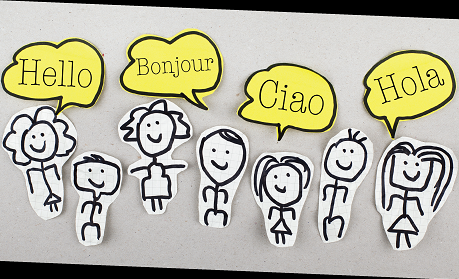 Some of the most spoken languages in the U.S. include English, Spanish, Chinese (Mandarin and other varieties), French and Vietnamese. We have the opportunity to learn these languages in high school and college, but for babies and tots — the prime time to soak up another language — it’s not so common.

Think about how you learn English from birth — sights, sounds, songs, playtime and social interaction. This is how babies and toddlers learn; they capture every piece of information and watch our every move. Their tiny minds absorb like sponges, so why not teach them another language, right now? The first two years of life is really the best time.

“Children learn their first language by absorbing the spoken language in which they are immersed,” says Juan Martínez, director at Cincinnati Spanish School. “Learning a second language is best approached in the same manner. Therefore, incorporating two or more spoken languages into daily life from birth is the best approach to raising a truly bilingual child.”

Once your child is about age 5, his learning ability changes, according to Martínez. That being said, the earlier you introduce a second language to him, the easier it will be for him to pick up and for him to become more fluent in it.

Here’s a fun fact: Scientists recently determined that it takes approximately 400 repetitions to create a new synapse in the brain — unless it is done with play. In that case, it’s between 10 – 20 repetitions, according to Vanessa Dixon, director at World of Spanish, LLC.

“There is a philosophy that children should not formally begin learning the written grammar of a second language in a classroom setting until after the age of 6,” says Martínez. “But spoken communication is the first to develop in humans.”

WHY LANGUAGE IS GOOD FOR DEVELOPMENT

Yes, they soak up languages with ease at a young age, but why should they learn it? From developmental to future opportunities, the benefits are endless.

Bilingualism is also beneficial for a child’s ability to interact with others and to be more tolerant with other cultures and the children around him. If your child learns two or more languages, it helps set him up for a positive future. We live in one big melting pot with a Hispanic population that grows each year, and we have the ability to communicate with other cultures, which gives us an advantage toward scholarships, job opportunities and more choices when it comes to college. The benefits don’t stop there.

“Studies have shown that learning a second language at an early age enriches a child’s mental development, especially his math and logic skills,” says Dixon. “Studies suggest that learning a foreign language increases the ‘grey matter’ density in the brain. They also gain structural and functional-cognitive advantages over their monolingual peers.”

HOW CAN YOU TEACH THEM?

If a foreign language class isn’t available at your child’s preschool or kindergarten, that doesn’t mean there are not other opportunities.

“If your kid’s school doesn’t have a language enrichment program, ask for one!” suggests Martínez. “It’s an easy activity to start up with the school’s administration or Parent Teacher Organization.”

There are in fact a variety of bilingual preschools and daycares available in Greater Cincinnati, but if this isn’t something you and your family can manage in your daily life, kids can absolutely learn at home and from their peers. It doesn’t have to be hour-long lessons from Rosetta Stone or daily classes. Make it simple and fun — play Spanish songs at home or introduce the language through play.

“Incorporating toys, games and movies in a second language into a child’s daily life also helps to ensure a steady pace of learning,” Martínez explains. “It’s a common misconception that bilingualism is learned in a classroom. Taking classes is important — very important — but it’s only a piece of the puzzle. Kids need to regularly be immersed in a language on a daily basis to truly become bilingual.”

A bilingual child care provider can help, too. Your child can learn more quickly with the “natural learning method,” and if you have family members or friends who speak the language, schedule some time together to have dinner or simply just to enjoy each other’s company — and talk!

“Learning a language can be fun for kids,” assures Martínez. “Not every family has parents or extended family who can speak to the children in another language, but there are other ways to incorporate language into your child’s daily life.”

Here are some other ways you can surround your kids with languages, according to Dixon and based on the book, Hola Mis Amigos, or Hello, My Friends:

• HAVE A SPANISH GAME NIGHT: Games you can play include Spanish Bingo, Spanish Scrabble, Charades, etc.

• NEW WORD OF THE DAY: Choose a daily word in the language to learn or even a phrase of the day. Use it in and out of the house when possible.

• USE LABELS: Label objects around the house — clothing, food items in the kitchen and cabinets, etc. This helps with language retention.

• VISIT YOUR LOCAL LIBRARY: Our city has excellent libraries with bilingual books, CD’s and movies. Ask your librarian for recommendations on titles.

• IMMERSE YOUR CHILD WITH CULTURE: Head to a cultural event such as one of the German Christmas markets in the winter, Salsa on the Square through September, or visit a Hispanic restaurant and point out words on the menu and their meaning.

Languages are available to your kids right here in our city. Check out these top places to get your kid started.

Cincinnati Spanish Academy
816 Delta Ave., Cincinnati; cincinnatispanishschool.com
Offers small group classes for ages 3 and older. They partner with local schools such as Madeira City Schools and Wyoming City Schools to offer before-school and after-school language programs in Spanish, Chinese and French, to help facilitate the adoption of another language from an early age.

Tri-State German-American Society
Notre Dame Academy 1699 Hilton Drive, Park Hills; tri-stategermanschool.org
For students of all ages and all levels — meets at Notre Dame Academy on the weekends beginning in the fall. They also hold a variety of German events throughout the year.