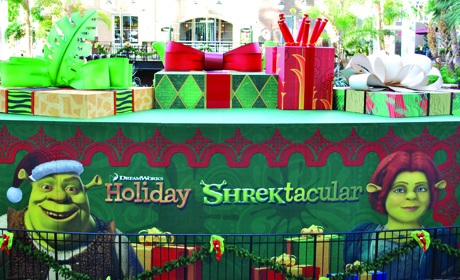 His name is in the title and he will make your children giggle like crazy during this wonderful … did I mention FREE … show that takes place within Gaylord Opryland Resort.

That’s right, this show is free. They call it a street party as everyone who is in the hotel during the times of the show can just walk right up and watch these spectacular dancers perform. But, don’t wait around as this show is only here during The DreamWorks Experience at Gaylord Opryland in Nashville from now through Jan. 1, 2013.

You’ll hear some of your favorite songs like “Move-It, Move-It” and more. The announcer really gets the audience fired up as each character is announced and comes to life right on the stage. To kick off the show while we were there, my husband was actually called out onto the stage as the announcer tried to embarrass him in front of everyone. Little did the announcer know, my husband is the greatest goofball of a dad and there’s no way you can embarrass him. Watch the video below, you’ll see what I mean! LOL! We tried to get our daughter to go with him, but she changed her mind at the last minute. She knew everyone would be laughing at Daddy — and she didn’t mind that — it’s just that she didn’t want anyone laughing at her. Too cute. Oh well.

After we’ve all had our giggles, the children were anxiously awaiting the arrival of Shrek. Our 2-year-old kept asking for him and they squealed with delight when he finally emerged from the giant gift box on the stage.

Oh, and did I mention … they make it snow! That’s right! Some fluffy, bubbly stuff falls from the sky and makes it snow on everyone! The kids LOVED it!

Hotel guests get to sit closer to the stage, too. It’s a great show from any seat, really.

Well, I don’t really want to go on and on about how great this mini free show is, just watch the videos and see for yourself! You will want to try to make your way over to the hotel and see it all in person, too. Your kids will thank you for it.
See Managing Editor Kiera Ashford’s husband get called out on stage:

Po from Kung Fu Panda takes the stage, too, during the Holiday Shrektacular show.