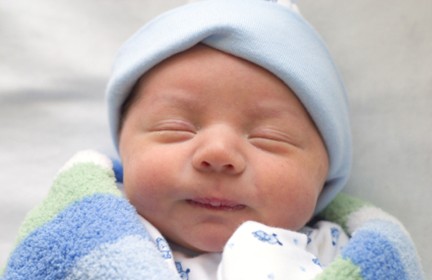 Simple brushstrokes with a paintbrush on the back of an infant’s arm reveal that infants love pleasant touch.

In a study, which took place at the Institute for Human Cognitive and Brain Sciences in Leipzig, Germany, researchers had infants sit in their parents’ laps while an experimenter stroked the back of the infant’s arm with a paintbrush. The experimenter varied the rate of the brushstrokes among three defined velocities (0.3, 3, or 30 cm per second), gauging the infants’ responses through physiological and behavioral measures.

The results showed that the infants’ heart rate slowed in response to the brushstrokes but only when the strokes were of medium velocity; in other words, the touch of the medium-velocity brush helped to decrease their physiological response.

According to the researchers, the findings “support the notion that pleasant touch plays a vital role in human social interactions by demonstrating that the sensitivity to pleasant touch emerges early in human development.” They say that the ability to perceive and sensitively respond to pleasant touch is likely vital early in life because of the fundamental role that touch plays in affiliation, bonding, and synchrony between infants and caregivers.

The researchers plan on extending these findings by exploring the brain basis of pleasant touch using neuroimaging tools and by investigating the psychological effects that pleasant touch has on infants’ social functioning.