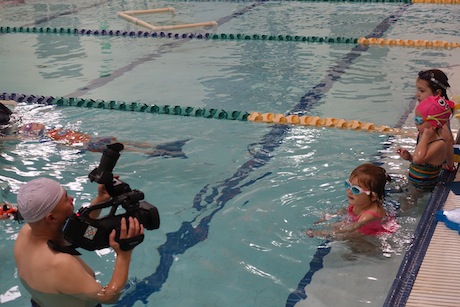 For nearly 20 years now – since 1998 – thousands of babies, toddlers, and children from all over Arizona have learned how to swim and developed a love for the water as a result of taking lessons at the Hubbard Family Swim Schools. Under the helm of co-owners, Bob and Kathy Hubbard, their Arizona swim schools have developed a world-class reputation and the couple has become leaders and expert speakers in the field of infant and children’s swim lessons. Hubbard Family Swim Schools offer lessons to infants and children, 8 weeks up to age 12. Their location in Cincinnati is inside the Kids First Sports Complex.

Recently in February, a TV film crew from China visited their Phoenix, Arizona location to do some filming and interviewing for an upcoming documentary that will air this year on China Central Television (CCTV). The working title right now for the documentary is, “Babies in Waterland.”

“We were honored that the documentary team from CCTV chose to visit our swim school,” says Bob Hubbard. “We originally met the film crew in Cambridge, England back in September, 2016, when Kathy and I were there to present a talk on the importance of introducing children to the water at a young age…They told us they had a great interest in the role water plays in the emotional, cognitive, and physical development of children and they wanted to come to Phoenix and see what our teaching methods were all about.” 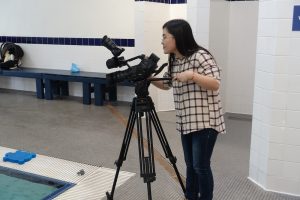 During their time in Phoenix, the Chinese film crew visited the home of the Young family, who has four children under the age of 7. They filmed all four children taking their swim lessons and according to Bob, “Their favorite subject quickly became daughter Nora, who at 3 years old is quite a little fish.”

The film crew also got terrific footage of Hubbard’s swim instructors teaching children with special needs. “We have several children enrolled in our schools who are dealing with special challenges ranging from blindness to spina bifida to Down syndrome,” explains Bob. “The film crew told us that they had a particular interest in seeing how these children excelled in an aquatic environment and the role the water plays in increasing their physical strength and flexibility.“

According to Yiping Sun, the official translator for the group, “We met Bob and Kathy at a conference in Cambridge and were impressed by their presentation, in which they talked about their family business in the U.S. and their dedication to teaching special children. Their stories were inspiring and touching, making us curious about who they are. So we interviewed them and soon realized that they are really the leading figures in the baby swimming industry. Bob was the former president of the United States Specialty Sports Association and both Bob and Kathy teach around the world…In the film we want to show people some inspiring stories about swimming, about water. And in Hubbard Family Swim School there are miracles – children who couldn’t walk start to walk, children who may be anxious and uneasy find their comfort and trust here. We can see that the Hubbard family is not just running a business. They are taking their social responsibilities through their work. What Hubbard family is doing is honorable and should be known by more people. More people should benefit from swimming.”