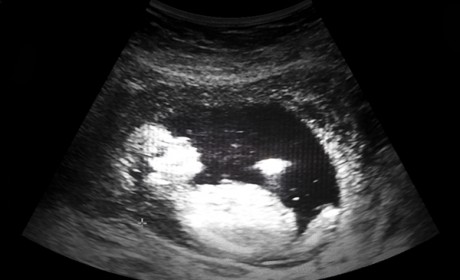 New research shows that expectant moms can stimulate their baby’s brain even when he’s in utero.

Should you be talking, reading and singing to that baby in your belly? Yes! Moms who talk, sing and coo to their babies in the womb actually play a part in shaping their baby’s brain, according to research newly out from the Proceedings of the National Academy of Sciences.While it’s nothing new that babies can hear their mother’s before they are born, current evidence shows they can also recognize subtle changes in pitch and indeed process complex information.
Researchers at the University of Helsinki in Finland looked at 33 moms-to-be, and examined their babies following birth. While pregnant, 17 of the mothers listened to a CD of two, four-minute sequences of made-up words in varying volumes from week 29 until birth. The moms and babies heard the nonsense words about 50 to 71 times.
Following birth, the researchers tested all 33 babies for normal hearing and then performed an EEG (electroencephalograph) brain scan to see if the newborns responded differently to the made-up words and different pitches. Babies who listened to the CD in utero recognized the made-up words and noticed the pitch changes; infants who did not hear the CD did not, the researchers found. They were able to spot this because the brain activity in the babies picked up when those words were played, while babies who didn’t hear the CD in the womb did not react as much.
So is it time to go out looking for fetal brain boosters? Maybe not. But definitely time for some sweet singing and conversation!