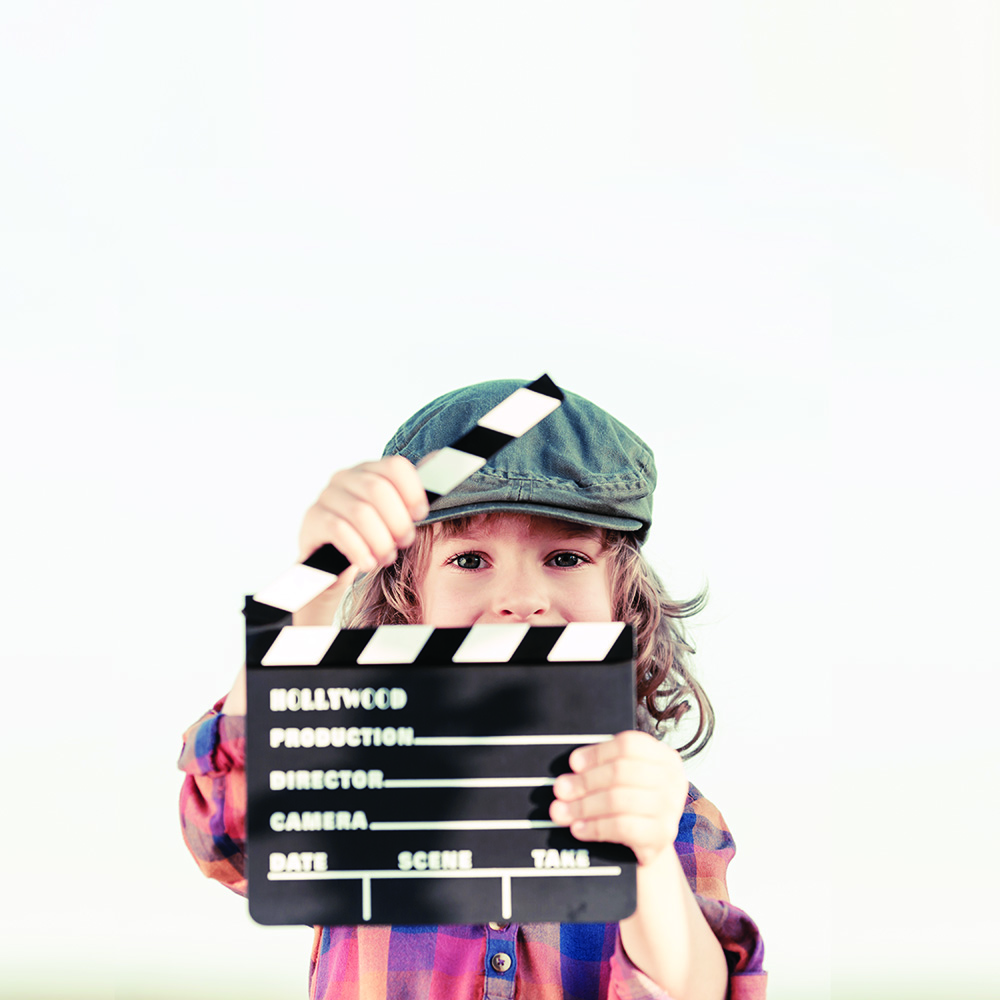 Professional modeling and acting is not for every child — it takes time, hard work, flexibility, and yes, a thick skin. But the rewards can be great, especially with supportive parents who keep things fun.

After patiently posing for the photographer on the floor of the studio, Nathan, this month’s cover kid, allowed us to perch him in a chair. But he clearly didn’t intend to stay in it for long, as he scooted ever closer to the edge, grinning at us all the while. So back to the floor we went!

Although Nathan is not currently represented by a model or talent agency, he is no stranger to the camera and the lights. Neither is mom and child model Myla Perry, who says temperament is critical when it comes to children and modeling.

“I think it’s key to find out what kind of temperament your child has. She could have the cutest face, but if she has the wrong temperament, then it’s time to get off the set!” she says.

But if your child enjoys hamming it up for the camera, and you’re willing to commit the time and effort that professional modeling and acting requires, it may be worth investigating.

Begin by researching local talent or model agencies. You could even contact the local Film Commission (the Cincinnati and Northern Kentucky Film Commission can be reached at 513-784-1744 or filmcincinnati.com), according to Kat McEntee, agent and owner of Katalyst. View agency websites to determine how they prefer to receive submissions.

“I like to meet the child and the parent,” says McEntee, who holds open auditions each month (this month’s open audition takes place on Wednesday, Aug. 21 from 4 – 7 p.m.). To attend, all you need to bring along is your tot and a snapshot. Meeting the children gives McEntee a chance to gauge their level of interest, she explains, adding that she has been known to turn down parents if their child seems unenthused.

When it comes to submitting photos of your child to an agency, you don’t need to submit professionally taken photos. Allie Wagner, model booker for Wings Model Management, suggests sending photos that allow an agent to focus on your child’s features. And don’t be afraid of things like missing teeth. Says Wagner, “Losing teeth is good — it’s natural! That’s what kids do.”

What They’re Looking For

An agency keeps an eye out for all kinds of qualities when it comes to child and baby models. At Wings, Wagner looks for unique features in tots, like very large eyes (in fact, she adds that bald babies are ideal for showing off the eyes). She also loves when a baby or child looks like the parents, especially if the parents are interested in modeling as well. That can make casting and the actual job much easier on everyone involved, since children often react well to their parents. McEntee looks at how children respond — whether it’s babies’ reactions to strangers or children taking direction and answering questions. Sam Wright, new talent coordinator for Heyman Talent Artists Agency, says that a lot of it has to do with what appeals to a mass market and current trends in advertising.

Modeling and talent work, especially for children, comes and goes, and agencies will do their best to manage your expectations of how things work so that you can better manage your children’s expectations. McEntee explains that some of it has to do with the age of children. “A great age is 6 – 11 years old,” she says. This is an age range that can get a lot of work in commercials, but there’s not as much work for ages 12 – 13. “I advise those kids to focus on learning,” she says, suggesting that children participate in community theater or take acting and vocal classes.

“We try to explain the reality of the industry,” says Wright. He adds that work is inconsistent, and that inconsistency often comes down to what projects the agency is being asked to fill. The agency itself does not create projects — their job is to serve as a “middle man” between the companies seeking a model or actor, and the models and actors themselves.

In addition, parents will need to remember that this venture is one that requires a lot of your time, patience and finances. Some agencies host workshops for talent to meet producers and casting agents, which can range in price from $100 into the thousands, although the agencies we spoke to kept prices in the $100 – $200 range, and in the case of Heyman, didn’t offer workshops but referred parents to outside classes. Plus, travel expenses to neighboring cities and states are your responsibility.

“We expect to have to invest our time, and in some cases, money, to be in this business, and so far we have not been disappointed,” says Dina Adams, mom to 7-year-old Ariana. “While Ariana has not yet had any jobs, we know she has just entered this business, and it may take time. We do know that when she does get an interview we may have to drive to get there, and we also know we may get there and she may not get the job. But it’s a chance we are willing to take.”

Flexibility is also key, according to both agents and parents. A lot of modeling and acting jobs take place during the day, which is something you may want to consider if your child is in school, say both Wright and Perry. And although they try to give parents as much notice as possible, the agencies themselves are often at the mercy of last-minute requests, which means you may only have a day to prepare for an audition, according to McEntee.

The trick is to be ready for disappointment, says Perry, both your own and that of your child. “It’s hard for parents not in the industry themselves,” she says. “They can take it personally, but they just need to know to take the emotion out of it, it’s a job. Your child could get a hundred no’s before he gets a single yes.”

“There is a big risk factor,” says Wagner, “and it takes a lot of drive and determination.” But for a kid who doesn’t give up and who has a strong support system, there are plenty of rewards. Perry has a laundry list of benefits to children, including learning to work on a team and to appreciate all kinds of different people, learning responsibility, discipline, focus, resiliency in the face of rejection, and how to adapt to new situations.

Wright suggests parents approach modeling and acting as something to do for fun, as few kids (and even adults) can turn this venture into a full-fledged career. “The number one thing parents can do is to help their kids be solid inside,” he says. Adds Adams, “The most important thing I would tell other parents is to prepare their child for let downs. They won’t get every job they try for, and when they work so hard and don’t get the job it can affect their confidence. We always go into an interview knowing that we want it, but also knowing that if we don’t get it, we will still continue to shine.”

Interested in child modeling? Here are a few local agencies to get you started!