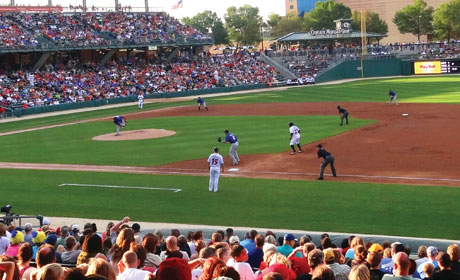 We rode along the Historic Central Canal, past public sculptures, across the Old Washington Street Pedestrian Bridge, and just outside the entrances to over half a dozen museums, and the Indianapolis Zoo. Though a bit unwieldy on turns and tough to pedal on hills, the bikes we rented from Wheel Fun made our afternoon at White River State Park delightful. Built for up to four people, and modeled after old-fashioned cars, our surreys’ awnings provided a bit of shade as we rode, and relaxed, and watched the bustle around us, including preparations at The Lawn for a Florence and the Machine concert that my daughter and I listened to in the evening.

At the southwest border of White River State Park stands Victory Field. Within weeks, fans will fill the stadium to cheer on the Indianapolis Indians, Triple-A affiliate of the Pittsburgh Pirates. The night we attended, the Indians beat the Buffalos in front of a near capacity crowd. Families brought picnics and fried chicken, and enjoyed the excitement in everything from luxury boxes to lawn seats. The Knot Hole Kids Club is such a good deal that even Cincinnati families might consider joining (for $16 kids get a full season pass to every home game). 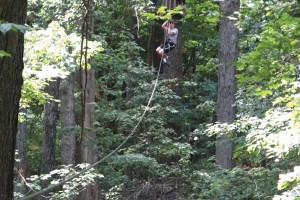 For a more daring adventure, we visited Go Ape! at Eagle Creek State Park. Children as young as 10 can climb rope ladders, swing on Tarzan ropes, and soar above treetops on the course’s five ziplines. Perhaps when I was 10, I could have done it, too. Unlike other zipping experiences, Go Ape! demands that participants complete a series of obstacles to reach each platform. There’s not just one long climb to some dizzying height, but a climb, a swing, a cargo net and a bridge. Safety rules require that every two participants under age 18 must be supervised by an adult in the group, so we had to pull off one of my children when my lack of physical fitness prevented me from completing the course. The guides were nice though, and let us switch the kids in and out among the obstacles.

If physical strength — or weather — prohibits an outdoor adventure in Indy, consider a visit to the Fountain Square Theater Building. This urban, trendy area offers shopping, a few eateries and Duck Pin Bowling. We entered the historic building beneath a neon blue and yellow sign and were a little fearful in the dark hallway, and more fearful when the elevator jerked and jolted up to the alley floor. It squealed open to another dark hall, that hardly reassured us, but once we opened the door to Duck Pin Bowling, we were glad we’d made the effort — it’s retro cool.

In the early evening, a crowd of college-aged boys, families and couples were already bowling. At the bar, lit in green neon, we traded our sandals and Nikes for bowling shoes, looked over the available snacks and drinks and got our score sheet. We settled in at our lane, relaxed in its wooden slatted seats (with wooden green cup holders), and admired the nostalgic curved chrome automatic ball return machine. Early rock and roll songs played in the background as we took turns trying to avoid the gutter and knock down the pins. Despite its name, the key difference between “bowling” and “duckpin bowling” isn’t the pins, but the balls. They are lighter and much smaller, fitting almost in the palm of the hand, making them easier for youngsters to handle, but no easier for me to score a strike, spare, or even to knock down most of those duckpins.