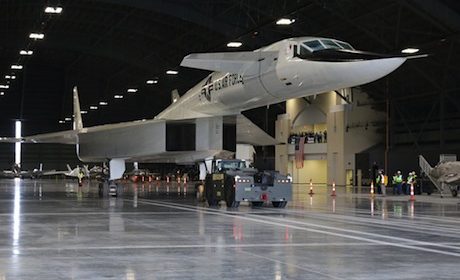 Need an idea for the remainder of winter? Bring your scouts to the Air Force Museum Foundation’s 2017 Scout Appreciation Months, held at the National Museum of the U.S. Air ForceTM in February and March.

Air Force Museum Attractions is offering a special Scouts-only package that includes a ticket to a film of your choice, a ride on one of our exciting simulators, and a set of personalized military-style dog tags for just $15 per person, with advance reservation.

Films shown include Fighter Pilot 3D, Journey to Space 3D, and Aircraft Carriers 3D. All films are shown on the six-story giant screen in the Air Force Museum Theatre, accompanied by eight-channel surround sound that is an amazing and awe-inspiring experience. The largest screen in SW Ohio puts you at the center of the action in a way no ordinary theatre can.

Looking for something a little bit more moving?  The new Pulseworks VR Transporter is an innovative multimedia motion experience featuring exciting technology that takes patrons on a spacewalk that will take riders on an extra-vehicular activity (EVA) to the International Space Station high above the Earth. Virtual reality technology allows patrons to see in all directions within a 3D world via high-tech goggles.

The Pulseworks ESP Motion Ride mimics the motion of any aircraft or space vehicle, allowing riders to experience the feeling of really flying at great speeds.  Wings: Flights of Courage, a journey through the history of aviation, is the signature ride on the ESP, placing riders right in the cockpits of many famous aircraft, from the Wright B Flyer to modern military jets.

Capable of accommodating up to 12 passengers, the Morphis MovieRide rotates and gyrates on hydraulic lifts, giving the passengers the sensation of actually flying along.  There are five different rides to choose from, including Riding the Wind and Destination: Black Hole.

With nine different aircraft to choose from, our 360° Interactive Simulators can seat two people at a time, one pilot and one gunner. The pilot has complete 360° control of the ride by joystick control. Directly in front of the pilot, the gunner commands an interactive display that allows both riders to feel as if they are piloting an actual aircraft.