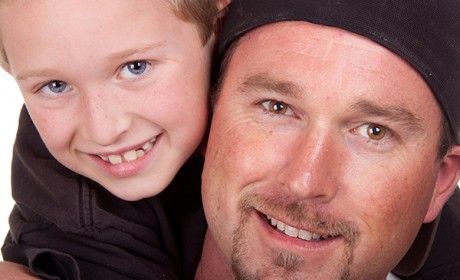 That one “Hoo-ah!” from him at just the right time of day is one of the great things about a dad’s role in the family.

Moms are often the ones credited with being in the forefront of their kids’ lives: all that cooking, cleaning and keeping kids safe. But it doesn’t hold water anymore that it’s all about what SHE does. Dad is the New Mom cries Men’s Health magazine, and while THAT can and will never be true, it does take two to bring a child into the world and a whole lot of love to raise that child well.
So lest you forget — and since we’re talking about what makes dads great — here’s a quick update to remind you of just how AWESOME fathers are!

1) He lets you try things without fretting that you’ll hurt yourself.
Lots of times moms will cry, “Be careful!” while at the same time dad’s crying out, “Go for it!” Dads are bigger risk takers than moms. This quality enables them to empower their kids with an inclination to try.

2) He tries hard to put in as much time at home as mom does with all the small stuff.
More dads are helping in ways they didn’t used to: doing laundry, cooking meals and getting up in the middle of the night with a crying infant. A Pew research study released earlier this year shows that in the last 40 years dads have increased the amount of time they spend on household chores from four hours to 10 hours a week.

3) He’s involved with the kids.
Gone are the days when only women talked about breastfeeding or bowel movements of kids. Dads are in the conversations whole hog now and holding their own.

4) He’s home more.
According to a study from the Pew Research Center, the number of stay-at-home dads is twice what it was 10 years ago.

5) Dad’s affection is like no other.
Yes he likes to high five and maybe say “Good job!” from time to time, but when Dad gives hugs out they are meaningful and powerful — and they send the message that words often can’t convey: I Love You. He’s the one who might hang the baby by the ankles, tickle her and toss her in the air … but she’s the one who can’t wait to see him coming!

Here’s some other interesting research findings about dads today from the book, The A-to-Z Guide to Raising Happy, Confident Kids by Dr. Jenn Berman.

• Infants who spend time alone with their dads show more varied social
and exploratory behavior than other children, are more curious, and are
better at dealing with stressful situations.

•  One-year-olds whose fathers are more involved protest separations from
their parents less than those with more absent dads.

• Babies whose fathers play with them regularly become better problem
solvers as toddlers.

• Sons with fathers who take responsibility with limit setting and
discipline and who help them with personal problems and school work display
a greater capacity for empathy.

•  Teenagers who live in two-parent families and have good relationships
with their dads are at a 40% lower risk of smoking, drinking, and using
drugs than teens from single-parent households.

• Children who feel close to their fathers are twice as likely as those
who do not to enter college or to find stable employment after high school,
75% less likely to become pregnant as teenagers, 80% less likely to spend
time in jail, and half as likely to experience depression.