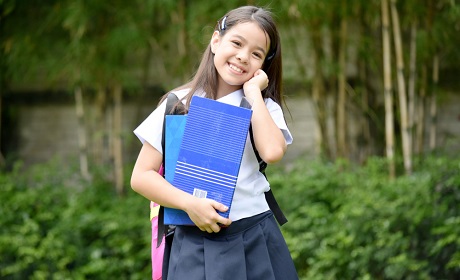 If you are leaning toward sending your kids to a private school, more than likely you have considered a Catholic school. They do, in fact, have many benefits and luckily we have fantastic schools in the Cincinnati area, public, private and Catholic that all have the same goal – educating your child, and the primary factor that sets Catholic schools apart from the rest is they focus on not only your kid’s education, but their mind, body and spirit, according to Vince Woodall, deputy superintendent at the Archdiocese of Cincinnati schools.

All Catholic schools are different, depending on the population they serve, but you will find that most incorporate faith with their academics, have smaller class sizes and offer high-quality programming and extracurriculars that differ from public schools. If you’re on the fence, there are many reasons families choose to go with a Catholic education for their kids, whether it be religion-based or their overall educational focus.

Although Catholic schools programs, structure and size vary in general, they all focus on educating the whole kid through curriculum, retreats and extracurricular, according to Woodall.

“Extracurriculars vary from elementary to high school,” he continues. “In most of our high schools, they pretty much mimic what is available in public schools, and some may be different. Most of our schools offer as many extracurriculars or more than some of the other options out there.

You’ll find a large focus on programs and extracurriculars available for your student. High-quality academics are incorporated into mass, prayer and religion, and you can expect your child to be exposed to general classes that include science, social studies, math and electives.

According to Lisa Caito, camp minister at Saint Ursula Academy, Catholic education includes a formational piece that a public school cannot include.

“In addition to a challenging, college-preparatory academic education, a Catholic school can provide opportunities for the formation of the whole person through faith-based programming, activities, prayers throughout the day,” she continues.

Sports are a large focus at most Catholic schools, and the focus is more than competition. For elementary, they offer a lot of the same sports opportunities as public schools, ranging from golf, hockey, soccer, volleyball, cross country, volleyball and more for boys and girls. According to Woodall, the leagues are a bit different, giving the kids an opportunity to play against one another. As for many Catholic high schools, they tend to have more competitive sports including basketball and football, for example, and for many parents, it is  very important that their child has the opportunity to participate in these athletic programs.

Catholic schools have smaller class sizes than most public schools, says Veronica Murphy, Head of School, Royalmont Academy, and they really focus on the needs of all of the students.

“Parents should ask what the ratio of teacher to student is at the schools they are considering, but one may find ratios of 15-1 up to 23-1,” she continues.

On average, most Catholic schools will have a smaller class size with 20 – 25 students per class, especially in elementary. Now with blended learning, they are able to have more students with some learning virtually and some in-person – education is changing in general, says Woodall.

“People like small class sizes and that’s what we have,” he says.

Catholic schools are more affordable than you may think, and many of them do offer financial support for all situations. A majority of Catholic schools accept the Ohio Educational Choice Scholarship (EdChoice) Program, if your public school district qualifies for it, which provides students from designated public schools the opportunity to attend participating private schools; this will go toward your tuition. The program also provides low-income students who are entering kindergarten through 12th grade scholarship opportunities and according to Woodall, the majority of the schools do offer another form of payment for scholarships.

According to Murphy, each Catholic school including those In the Archdiocese of Cincinnati, try very hard to do what is possible to help families attend.

“A family would apply online to FACTS; financial information is placed into this financial application,” she says. “It allows the school to know the needs of the family so the school can help in the best way possible for the school and family.”

If you have a child with special needs, they can apply to the Peterson or the Autism scholarship – this can be used to pay for special education services at a Catholic school, if the Catholic school is a provider.

Find what tuition assistance is out there for your family at catholicbestchoice.org, and know that your number one tool is to ask questions galore, as you will be surprised at what scholarships your school offers. Contacting multiple schools of your interest is ideal to see what options are out there to meet your family’s individual needs.

A Day in the Life

So what does a day in the life of a Catholic student really look like? It’s more than just waking up, putting on a uniform and being greeted at the door. Again, it varies from school to school, and it is like the day of any other student, except faith infused into everything they do, says Woodall.

“It’s not a set day of here’s Catholic time, here’s academic time,” he continues. “It really is an infusion.”

Kids do attend mass, whether it be once or twice a week or once a month, and it varies at each school. There is also prayer at the beginning of the day, lunch and at the end of the day and students generally take one required religion class each day. Retreats also become part of their daily life as students get closer to high school. Core classes are also offered including advanced AP classes for high school students and classes to help students who need assistance and help.

Volunteering and community service is another big part of a student’s school life. Community Service Learning programs provide ways for students to be active in the larger community, to develop relationships and practice their faith, says Caito.

“Throughout the school year, you will have opportunities to engage in tutoring and mentoring programs for area youth, in collecting food and supplies for the under-served, in visiting and assisting the elderly, and in both domestic and international summer mission trips.” she continues.

Parents play a huge role, too, and most Catholic schools communicate this well with their students, that parents are indeed their first and most important teachers.

“We want the students to be challenged and succeed to his or her fullest potential,” says Woodall. “And parent corporations are equally important.”

Parent involvement is extremely important in the Catholic community, and they also recognize this can be tough, according to Woodall. A parents’ involvement includes giving back through volunteering and helping schools get done what they want to get accomplished, and that is setting a strong foundation for your kids outside of school hours around the dinner table.

“Our aim is to support each family as we know parents are the first teachers of each child,” says Murphy.

So Why a Catholic School?

Parents choose to go with a Catholic school for more than religious purposes.

Some may think you have to be Catholic to attend a Catholic school, and this is not the case. On a national level, Catholic schools tend to be about 20 percent non-catholic and 80 percent Catholic, but all students share the same experience, and many families who are not Catholic tend to choose a Catholic school for the well-rounded programs.

“Very often families have rediscovered their faith and become stronger,” says Murphy. “In the end, we believe the faith-based approach is a blessing to every family no matter their spiritual background.”

For the families who do practice Catholicsm, sending their kids to Catholic school is beneficial as they get to live in the life of their religion.

The Catholic education concept has remained the same even throughout the pandemic, if anything, it has become stronger than ever, according to Murphy.

“The pandemic caused us to re-envision our solid educational methods into various virtual platforms,” says Murphy. “Our teachers have spent untold hours creating new lessons, reaching out in new ways, and creating several assessment methods. Each school created a plan(s) to address in-person as well as virtual learning.”

If you are still unsure on whether a Catholic school is right for you and your family, the best actions you can take are to attend open houses (many coming up this month, virtually and on-site), ask questions, research and visit as many schools as possible.